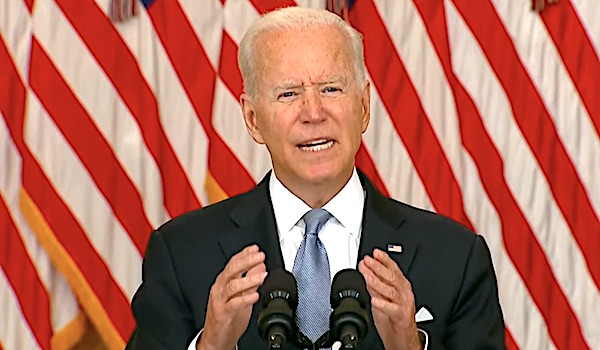 His father's battles with those massive legacy and social media corporations in America triggered many while Donald Trump was in office to pursue online news sites to find the truth.

Now Donald Jr. is scolding the industry for failing to report the truth again.

This time it's because those American industries essentially ignored a key move by one of the nation's closest allies – Great Britain.

That's where lawmakers recently – in essence – found Joe Biden "in contempt over his disastrous and 'dishonorable' withdrawal from Afghanistan."

If we had a real media in America you’d think they’d make a really big deal about the fact that our greatest ally abroad, Great Britain, literally held our president in contempt over his disastrous and “dishonorable” withdrawal from Afghanistan.

But we don’t have a real media! pic.twitter.com/3u97rmGrI6

The Gateway Pundit reported Tom Tugendhat, a member of Parliament, gave an emotional speech about the situation, explaining, "Those who have never fought for the colors they fly should be careful about criticizing those who have?"

Joe Biden has been a senator, vice president, and now president, in his long career inside the Washington establishment.

It was the U.K. Telegraph that reported politicians in the U.K. last week united "to condemn 'dishonor' of U.S. president's withdrawal and his criticism of Afghan troops left behind to face Taliban."

Biden's actions were characterized as "catastrophic" and "shameful."

The comments came as the Houses of Parliament "delivered an unprecedented rebuke to a U.S. president," the report explained.

"Former defense chiefs who led British troops in the Middle East were among those to speak out, while there were warnings that the West's withdrawal would embolden Russia and China," the report explained.

Prime Minister Boris Johnson also took a swipe at Biden, with, "The West could not continue this US-led mission – a mission conceived and executed in support and defense of America – without American logistics, without US air power and without American might."

Tugendhat, who fought alongside Afghans as a British soldier, said, "To see their commander in chief call into question the courage of men I fought with, to claim that they ran, is shameful."

A Labour leader charged Biden simply threw "us and everybody else to the fire."

Lord Howard, another former Tory leader, said Biden's withdrawal "is, and will be seen by history as, a catastrophic mistake which may well prove to be the defining legacy of his presidency."