President Biden has declared that "America is back" as the global leader, with a president who will "repair alliances" and restore respect and cooperation, but he got a big thumbs down from the British Parliament for his handling of the withdrawal from Afghanistan.

Warning China would exploit the disaster to pressure Taiwan, Smith said "America must come back" to its position of global leadership.

Tom Tugendhat, Conservative Party chairman of the Foreign Affairs Committee, said in an emotional speech from the floor of Parliament said that as a military veteran who served in Afghanistan, the past week has been one "that has seen me struggle through anger and grief and rage."

"The abandonment," he said, "not just of a country but of the sacrifice my friends made."

He took aim at Biden's blaming of Afghan army forces who fought alongside Americans.

"To see their commander in chief," Tugenhadt said, referring to Biden, "call into question the courage of men I fought with, to claim that they ran, is shameful."

He added, "Those who have never fought for the colors they fly should be careful about criticizing those who have."

An extraordinary and moving speech from veteran MP Tom Tugendhat, with very harsh words for President Biden on Afghanistan

“To see their commander in chief call into question the courage of men I fought with, is shameful.” pic.twitter.com/ZgEEHwD9MI

The Washington Examiner's Tom Rogan observed that British parliamentarians "are realizing that Biden's inaugural address pledge to be a 'strong and trusted partner' and 'repair our alliances' might not be worth all that much."

And it hasn't escaped British notice, he said, that Biden's response to criticism has been one of "petulant rage."

"Rather than accept that mistakes have been made and attempt to mitigate them, Biden has sought to change the conversation and hidden to avoid questions from the media."

In his interview with ABC's George Stephanopoulos on Wednesday, Biden showed "a callous disregard for the humanitarian disaster and credibility crisis he has induced."

"If top politicians from America's closest ally are offering such harsh criticisms out loud, one can only wonder what other allies are thinking," Rogan wrote.

No tweet has ever aged so badly so quickly… #YellowBellyJoe pic.twitter.com/vCOZI3uze4

'That's not the way you treat your allies'

In the lobby of the European Union's headquarters in Brussels earlier this summer, Biden declared "America is back."

"It's overwhelmingly in the interest of the United States of America to have a great relationship with NATO and with the EU," Biden said at the time. "I have a very different view than my predecessor did."' 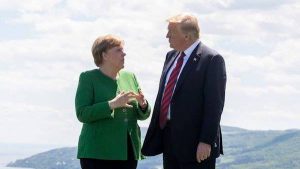 But German Chancellor Angela Merkel said at a press conference this week the mishandling of Afghanistan was a "bitter, dramatic and terrible" development. And behind the scenes, CNN reported, people familiar with the matter said Merkel has been more critical of Biden's decision, telling members of her party that "domestic political reasons" led him to decide on a withdrawal.

Canada's Justin Trudeau hasn't yet spoken with Biden, but in a press conference on Wednesday he had a phone call this week with former Secretary of State Hillary Clinton.

The prime minister said she "shares our concern for Afghan women and girls."

"She welcomed our efforts and urged Canada to continue our work."

Ian Bremmer, director of the Eurasia Group, told CNN there's a problem with "a lack of communications, of honesty, with the American people and with allies around the world who are deeply disappointed with a Biden administration that they felt would be much more multilateral, especially on an issue where the allies have been fighting with the Americans for 20 years now."

"The decision on how and when to leave was made unilaterally by the Americans, and that's not the way you treat your allies, frankly," Bremmer said.

Meanwhile, after blocking the expansion of U.S. and Canadian oil production, Biden is pleading with OPEC and other major oil producers to increase production.

The answer he has received, wrote the Washington Examiner's editorial board, translates roughly to "drop dead."

Reuters reported the oil producers have signaled they "believe oil markets do not need more oil than they already plan to release in the coming months."

Average gasoline prices are currently 48% higher than they were the day of the Nov. 3 election.

Biden’s request of OPEC, the Examiner board said, "evinced a belief that environmentalists in the United States are easily fooled — that he can placate them by restricting domestic production while simultaneously calling for more imported oil that releases exactly the same amount of carbon dioxide when burnt."

"Perhaps Democrats will remain in denial about just how weak Biden has become, but the reality has not been lost on OPEC."

Meanwhile, Iran is testing U.S. authority, with the head of the Iranian proxy terrorist organization Hezbollah, Hassan Nasrallah, confirming an oil tanker is preparing to sail from Iran to Lebanon in defiance of U.S. sanctions.

Nasrallah on Thursday dared the U.S. and other enemies of Iran to try and stop the shipment, the semi-official Tasnim News agency reported.

The White House is "really shellshocked" by the "defeat" they have been handed in Afghanistan, according to Washington Post columnist David Ignatius.

In an interview Thursday with MSNBC's "Morning Joe," he pointed to Biden's combative defense of his decision-making.

"My sense, as I talk to people in the White House, watched these folks on TV, is that they are really shell shocked," Ignatius said.

"This is a kind of defeat, a level of reversal that these folks have never known in their lives. These are people who have never gotten, you know, a bad grade in school, and suddenly they find the world collapsing around them. And I think it’s been really, really difficult for them to deal with this. It’s overwhelmed every other issue for the White House.”

Ignatius said the White House's reaction can be seen in Biden, "this defensiveness, almost brittleness."

"He’s trying to talk tough, the buck stops here, you know, chaos was baked in, firm presidential lines of leadership, but even within the White House, I think there are people who wish he was being more compassionate, speaking more to the human suffering that he’s seeing around them than to the toughness and resoluteness of his own decision-making.”