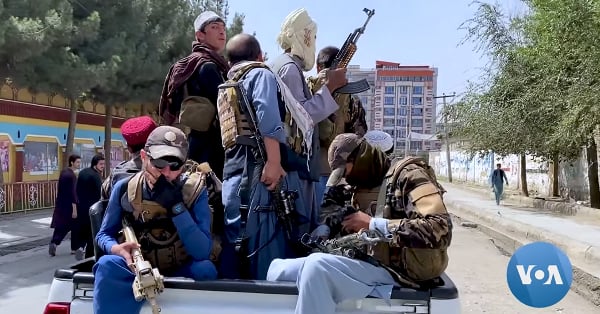 In a move that has prompted outrage among lawmakers and military officers, U.S. officials gave the Taliban a list of the names of American citizens, green card holders and Afghan allies to grant entry into the airport perimeter controlled by the Islamic group.

"Basically, they just put all those Afghans on a kill list," said a defense official who spoke to Politico on condition of anonymity.

"Its just appalling and shocking and makes you feel unclean."

Politico, citing three U.S. and congressional officials, said the intent was to expedite the evacuation of tens of thousands of people from Afghanistan amid the chaos of the Taliban takeover.

But with the Taliban's reputation for murdering Afghan "collaborators," the move has been widely criticized.

The news came hours after two ISIS terrorist attacks on Americans and Afghans outside the Kabul airport on Thursday killed at least 13 U.S. service members and wounded another 14.

A reporter asked Biden about the Politico report at the White House after addressing the nation on the deadly attacks.

The president didn't deny the report.

"I can't tell you with any certitude that there’s actually been a list of names – there may have been, but I know of no circumstances. It doesn't mean it doesn’t exist, that here’s the names of 12 people, they’re coming let them through – that very well could have happened," Biden said.

A U.S. official told Politico the names had to be handed over "because of the security situation the White House created by allowing the Taliban to control everything outside the airport."

Politico commented that the fact that U.S. officials "handed over a list of Afghan allies and American citizens and residents shows the extent to which they outsourced security of the airport’s outer perimeter to the Taliban."

"The Taliban has gone door-to-door in search of Afghan interpreters and others who helped U.S. and Western forces," Politico noted.

Two defense officials said that in written and verbal communications, Gen. Frank McKenzie, commander of U.S. Central Command, and Rear Adm. Peter Vasely, head of U.S. forces on the ground in Afghanistan, have referred to the Taliban as "our Afghan partners."

After the attacks, Sen. Bob Menendez, D-N.J., the chairman of the Senate Foreign Relations Committee, appeared to criticize the Biden administration's partnership strategy.

"As we wait for more details to come in, one thing is clear: We can't trust the Taliban with Americans' security," he said.

Sen. Josh Hawley of Missouri was among many Republican lawmakers who called on Biden to resign after the deadly attacks Thursday.

"To say that today’s loss of American lives in Kabul is sickening does not begin to do justice to what has happened." he tweeted. "It is enraging. And Joe Biden is responsible. It is now clear beyond all doubt that he has neither the capacity nor the will to lead. He must resign."