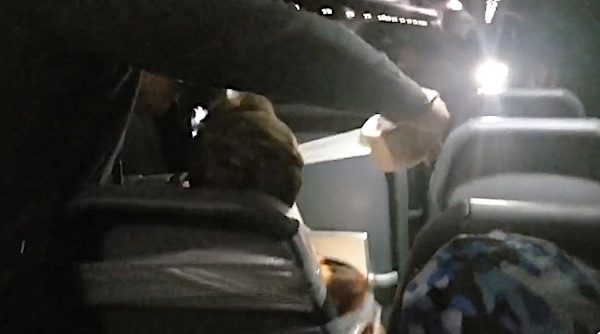 A passenger on a Frontier Airlines flight was duct taped to his seat after inappropriately touching and punching flight attendants on Saturday, an alleged video shows.

The video shows Maxwell Berry, 22, of Norwalk, Ohio, being duct taped to his seat after allegedly groping two female flight attendants then punching the male attendant who responded to the situation on a flight from Philadelphia to Miami, WPLG first reported.

Berry had two drinks on the flight and ordered a third before he brushed his empty cup against the backside of one of the female flight attendants, according to WPVI-TV.

Berry proceeded to spill his new drink on his shirt, walked to the bathroom and returned shirtless where a flight attendant helped him retrieve a new shirt out of his carry on, WPVI-TV reported. He then allegedly grabbed the breasts of both female flight attendants after walking around the plane for 15 minutes.

“He came up from behind and put his arms around both of them and groped their breasts,” the official police report said, according to WPLG.

Berry allegedly punched a male flight attendant in the face after he was called over to monitor the situation, according to WPVI-TV. As the fight broke out the passengers were able to restrain Berry who was eventually duct taped to his seat.

Passenger Alfredo Rivera documented the physical altercation on his phone, WPLG reported. “He was starting to get aggressive and basically attacked the male flight attendant,” he said.

Frontier Airlines described Berry’s actions as “inappropriate physical contact” with the female flight attendants and that he “physically assaulted another flight attendant,” in a statement to the Daily Caller News Foundation.