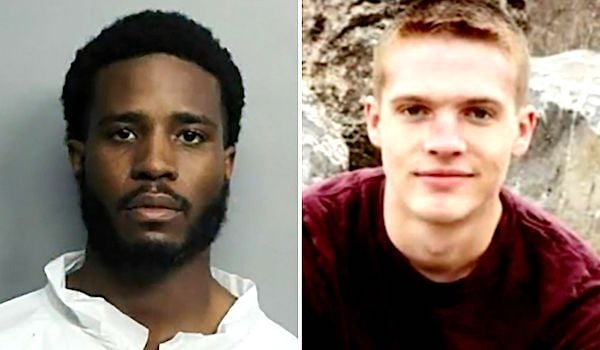 A Colorado tourist enjoying a meal with his wife and 1-year-old son in Miami Beach, Florida, was shot and killed Tuesday, with his alleged murderer dancing on his body after the horrifying incident.

Police arrested Tamarius David of Norcross, Georgia, charging him with second-degree murder with a weapon and attempted murder for shooting at and missing another man in the area just moments earlier.

The victim is 21-year-old Dustin Wakefield, who was dining on the outside patio of La Cerveceria restaurant, in the heart of the city's famous Ocean Drive.

An arrest report says David was "high on mushrooms which made him feel empowered," and that he "randomly chose" to shoot Wakefield.

"After the shooting, he was dancing on top of the guy," a witness, who didn't wish to be identified, told CBSMiami.

Wakefield's uncle told the Miami Herald that Dustin Wakefield was vacationing with his family from their hometown of Castlerock, Colorado.

"This guy came in with a gun waving it, saying it's time to die. He pointed the gun at his son and Dustin said, 'He's only a boy,'" said Mike Wakefield.

"Dustin stood up between the gunman and the baby and he shot him. He shot him multiple times on the ground."

"He was the kindest kid. He loved his family. He loved being a dad," he said, noting the young victim worked in the construction industry and loved music and hunting.

WSVN-TV, the local Fox affiliate, posted video of the dance, calling it "chilling."

Chilling: This shows an armed man dancing just after the murder victim was shot at La Ceveceria restaurant on Ocean Dr. @wsvn pic.twitter.com/w4fuEMr46F

Other footage showed David in an alley adjacent to the scene, yelling, "I did it. I did it,"according to the Herald.

WPLG-TV spoke with Dustin's mother Lora Wakefield, who said her son will be remembered as a "worshiper" and "the best dad ever."

"We saw miracles with him," she said, referring to healings they experienced. "He's amazing."

The alleged shooter appeared in court before Judge Mindy Glazer on Wednesday afternoon. At one point, the suspect asked about his bond.

"Sir, you are being held with no bond. You shot and killed somebody in cold blood," the judge said, reported WPLG.

The Miami Herald spoke by phone with the suspect's father, who indicated his son's last name is actually Davis, contrary to the police report. His father said his son was visiting South Beach with friends, and worked as a UPS driver in Georgia

A GoFundMe page has been established to support the Wakefield family.

Uncle of Miami Beach shooting victim tell us: “All I can say is Dustin loved his family and loved and cared for all he met. He will be missed in this world. Dustin saved his son and his family.” #MiamiBeach #SouthBeach @WPLGLocal10 pic.twitter.com/0bNxqpwyuZ