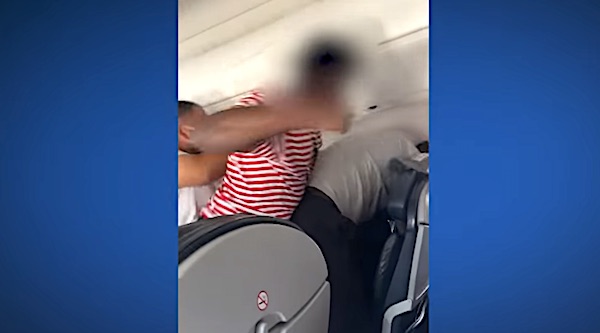 A video captured two men trading blows along the aisle of a landed plane over allegedly a reclining seat on a landed American Airlines plane on Sunday.

The flight from New Orleans to Austin arrived around 4:21 p.m. at Austin-Bergstrom International Airport, but the two were not arrested after the incident, Austin Police told the Daily Caller News Foundation. Police didn’t go into detail about why they weren’t arrested.

“Stop it,” a passenger is heard screaming in the video posted to KXAN’s Youtube channel. “Do not hit me,” one woman yells.

“Just don’t hurt anybody else on the plane,” another passenger says in the video.

One passenger said the incident began “over a seat that couldn’t unrecline,” according to KXAN.

The two men reportedly started harassing each other over the stuck seat, according to CBS Austin. “When the plane finally landed in Austin and the seatbelt sign was turned off, both men jumped up and physically started fighting each other,” a passenger told CBS Austin.

One man is seen on video trying to stop the fight but to no avail.

The Federal Aviation Administration reported in July 3,615 unruly passenger incidents. There are also 2,666 airlines reported unruly in mask-related incidents this year relating to noncompliance with the federal mask mandate that remains in place for flights and public transit.

Two women were filmed fighting on a flight from Vegas to Atlanta in July. One passenger can be heard saying in the video “it’s lit” as they are fighting.

Several passengers on a Frontier flight started trading punches when it came time to unload the luggage in July.