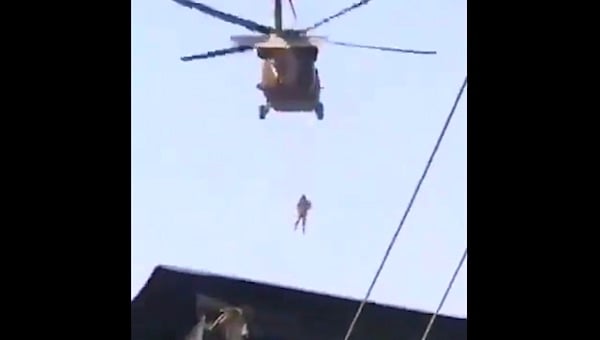 A man is seen hanging from a helicopter over Kandahar, Afghanistan on Sunday, Aug. 29, 2021. (Video screenshot)

Video emerged Monday showing a man hanging from a U.S.-supplied helicopter during what is being called an aerial "patrol" of Kandahar, Afghanistan.

The footage shared by the Talib Times, which calls itself the "English language official account of Islamic Emirate Afghanistan," shows the person dangling from what's thought to be a UH-60 Black Hawk chopper.

Our Air Force!
At this time, the Islamic Emirate's air force helicopters are flying over Kandahar city and patrolling the city. pic.twitter.com/rlE6nUldZf

The caption reads: "Our Air Force! At this time, the Islamic Emirate's air force helicopters are flying over Kandahar city and patrolling the city."

The dude is alive by the way. pic.twitter.com/UKt1VUpK8n

The reason for the man hanging was unclear, but the Right Scoop site suggested it may have been a gruesome, public execution.

Grabbed this from a Taliban Twitter account — a Taliban-piloted UH-60 Black Hawk hovering over Kandahar with what appears to be a person, or maybe a statue, hanging from a cable underneath pic.twitter.com/36HFMLEwmn

"I can't imagine this could be anything other than a public execution by the Taliban," its report stated. "Why else would you hang a man from a helicopter like this? But I'm open to suggestions otherwise."

It appears to be (now former) Afghan Air Force pic.twitter.com/plG695bMfv

The unverified video was shared just one day before the remaining American troops were expected to exit Afghanistan.