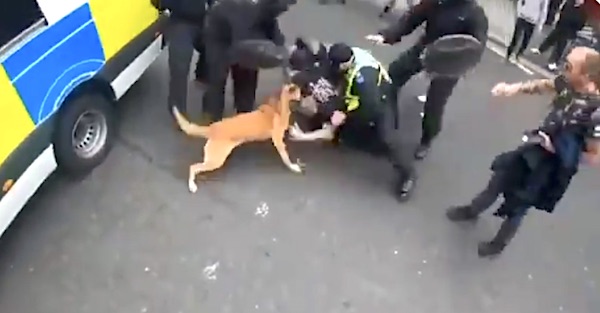 Police use a dog to attack an anti-vaccine protester in London, England, on Sunday, Aug. 29, 2021. (Video screenshot)

Police in the United Kingdom have decided they're allowed to unleash a vicious weapon on protesters who are opposing COVID-19 vaccines and their mandates.

A video shows police allowing a trained police dog to attack a protester they've taken to the ground, and lock his jaws, apparently on the man's shirt and shoulder.

See it (Be aware of offensive language):

The video was uploaded over the weekend and on Monday was hurtling toward a million views.

ITV reported 12 people were arrested during the protest at Newcastle City Center.

Hundreds gathered there to protest the rollout of COVID-19 vaccinations, and Northumbria officers in riot gear marched into the dispute.

The report said Supt. Steve Wykes of Northumbria Police explained the police priority was to be "ensuring the safety of the public."

And he called the actions a "proportionate policing response to the protest activity."

Those arrested were taken into custody, he claimed, due to "violent behavior."

An anonymous commenter online explained what was going on: "I know a dog bite might not seem like it's for your own health but it definitely is."