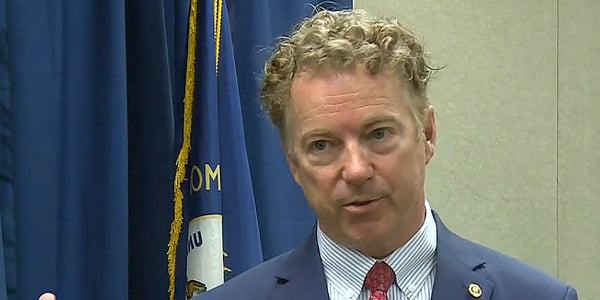 YouTube has suspended U.S. Sen. Rand Paul, R-Ky., from posting videos on its platform, deeming the physician's research-supported claim that most face coverings don't stop the spread of the coronavirus "medical misinformation."

"They are now banning all my speech, including speech that is given on the Senate floor, which is protected constitutional," Paul told reporters on Tuesday.

The suspension is in effect for one week.

"YouTube now thinks they are smart enough and godly enough that they can oversee speech, even constitutionally protected speech," said Paul, who is a practicing eye doctor.

However, last week Joe Biden's former COVID adviser, Dr. Michael Osterholm, acknowledged in a CNN interview that "many of the face cloth coverings people wear are not very effective in reducing any of the virus movement in or out."

He said we should "get rid of the term masking" because it "implies anything you put in front of your face works."

Here's Dr. Osterholm on CNN saying exactly the same thing that @RandPaul just got suspended from YouTube for saying: that cloth masks, as opposed to N95s, provide very, very little protection. Why can yo say this on CNN or PBS but not YouTube????pic.twitter.com/gHJodnERL7

Dr. Anthony Fauci, Biden's top coronavirus adviser, famously said in a "60 Minutes" interview that there was "no reason to be walking around with a mask." Later, Fauci explained he made the statement largely because he didn't want to create a shortage of masks for frontline health workers. But Fauci said the same thing in a February 2020 email responding to questions from Health and Human Services Secretary Sylvia Burwell.

"The typical mask you buy in the drug store is not really effective in keeping out virus, which is small enough to pass through the material," he wrote. "It might, however, provide some slight benefit in keep out gross droplets if someone coughs or sneezes on you. I do not recommend you wear a mask."

In March 2020, the Centers for Disease Control declared masks "are usually not recommended" in "non-health care settings."

Last week, YouTube, which is owned by Google, removed a video of an interview Paul did with Newsmax in which he discussed the evidence that the pandemic originated in a Chinese lab and quoted two peer-reviewed studies finding masks are not effective in stopping the spread of the virus.

YouTube removed a second video, uploaded by Paul, in which he defended his comments on masks and rebuked YouTube for removing the Newsmax interview.

"Saying cloth masks work, when they don't, actually risks lives, as someone may choose to care for a loved one with COVID while only wearing a cloth mask," he said in the video.

"This is not only bad advice but also potentially deadly misinformation."

On Twitter, Paul said it was a "badge of honor ... leftwing cretins at Youtube banning me for 7 days for a video that quotes 2 peer reviewed articles saying cloth masks don’t work."

He informed followers the "banned video" can be viewed at a libertarian site he created called Liberty Tree.

On Tuesday, Paul told reporters he's aware that as a private company YouTube can ban anyone from its platform. But he said the company is acting as "an arm of the government without any repercussions or push back."

"It is really anti-free speech, anti-progress of science, which involves skepticism and argumentation to arrive at the truth," Paul said. "YouTube and Google, though, have become an entity so huge that they think they are the arbitrator of truth."

Paul said he hoped that competition would prove YouTube "to be wrong in their ways," advocating the video-sharing site Rumble.

A study by the University of Louisville, based on CDC data, found that state mask mandates did not help slow the spread of COVID-19.

A study by the CDC last October indicated that Americans were adhering to mask mandates, but the requirements didn't appear to have slowed or stopped the spread of the coronavirus. And further, it found, mask-wearing has negative effects.

Paul to Fauci: We're done listening to you!

Last week, Paul, who has famously clashed with Fauci over coronavirus policy, urged Americans to "send a message" to the White House health adviser: "We're done listening to you!"

The senator's email to supporters came after Fauci advised vaccinated Americans to wear a mask and warned that the nation is "in trouble" because people who refuse to be vaccinated are allowing the delta variant to spread.

In July, Paul sent a criminal referral to the Department of Justice accusing Fauci of lying to Congress about his role in funding research at the Wuhan Institute of Virology that possibly is linked to the COVID-19 pandemic.

In May, Paul said in an interview that while there's no hard proof yet, it was becoming clearer that Fauci "could be culpable for the entire pandemic."

That month, Paul confronted Fauci with the lab-leak theory, asking him directly if the NIH funded gain-of-function research at the Wuhan lab. Fauci declared "the NIH and NIAID categorically has not funded gain-of-function research to be conducted in the Wuhan Institute." However, the branch Fauci has directed since 1984, the National Institute of Allergy and Infectious Diseases, provided funding to the Wuhan lab. The Wuhan lab's chief scientist, Dr. Shi Zhengli, notes funding by NIAID in a research article published Nov. 30, 2017, titled "Discovery of a rich gene pool of bat SARS-related coronaviruses provides new insights into the origin of SARS coronavirus". Paul points to a review of Shi's paper by MIT biologist Kevin Esvelt that concluded "certain techniques that the researchers used seemed to meet the definition of gain-of-function." In May 2017, Americans scientists who had received grants from Fauci's NIAID headlined a conference hosted by the Wuhan lab focusing on "gain of function research and gene editing," the National Pulse reported Wednesday.

In May, former New York Times science writer Nicholas Wade wrote a lengthy analysis of the origin of the pandemic in which he concluded that while hard proof is lacking -- due largely to China blocking access -- the available evidence overwhelmingly points to a leak from the Wuhan lab.