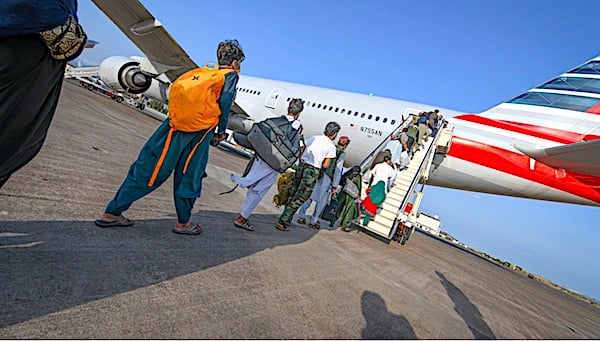 That's despite several embarrassing corrections to widely cited stories and the CDC's recommendation that the FDA-approved drug be given to most refugees who enter the United States. 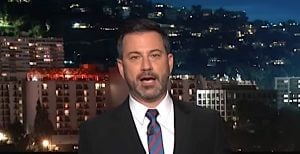 "I leave you people alone for two months, and you start taking horse worm medicine?" Kimmel asked his audience, the Blaze reported.

Minutes later, he noted that White House health adviser Dr. Anthony Fauci "said that if hospitals get any more overcrowded, they're gonna have to make some very tough choices about who gets an ICU bed."

"That choice doesn't seem so tough to me," the TV host said. "Vaccinated person having a heart attack? Yes, come right on in, we'll take care of ya. Unvaccinated guy who gobbled horse goo? Rest in peace, wheezy."

Aside from the issue of whether or not ivermectin is an effective and safe treatment for COVID 19 – 44 peer-reviewed studies, 31 randomized controlled trials and real-world experience indicate it is – the fact that the CDC recommends the drug for most refugees entering the United States gives pause to the insinuation that it can be easily dismissed because a handful of people have taken the version meant for animals.

Are the media mocking ivermectin because it's actually an effective and inexpensive way to beat COVID?
98% (908 Votes)
2% (14 Votes)

The CDC states on its website that all refugees from Middle Eastern, Asian, North African, Latin American and Caribbean nation should receive "presumptive therapy" that includes two 200 mcg/kg doses of ivermectin once a day for two days before departure to the United States. 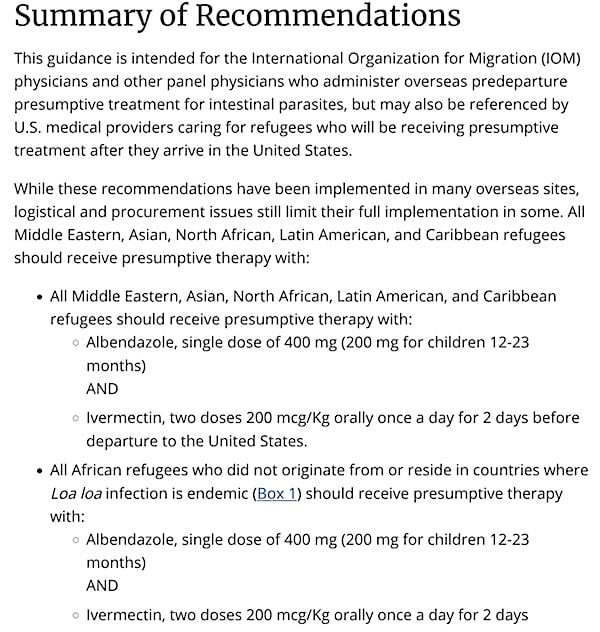 The CDC is recommending ivermectin for many people coming to the United States. (CDC website screenshot)

The CDC's recommendation of ivermectin, which was touted as a "wonder drug" in the Journal of Antibiotics, is for the treatment and prevention of intestinal parasites. But the drug – whose inventors were awarded a Nobel Prize – has been shown in both in-vitro and in-vivo studies long before the COVID-19 pandemic to have strong antiviral as well as antiparasitic properties.

The CDC explains its policy: "To promote healthy resettlement, CDC provides supplemental guidance to panel physicians caring for US-bound refugees. The Overseas Refugee Health Guidance provides panel physicians with supplemental guidance on vaccination, pre-departure treatments for malaria and intestinal parasites and fitness to travel. These activities are coordinated with the International Organization for Migration (IOM)."

The FDA warned in August 2020 of "consumers who may self-medicate by taking ivermectin products intended for animals." One day later, the National Institutes of Health published a guideline that "recommends against the use of ivermectin for the treatment of COVID-19, except in a clinical trial."

But in its consumer guidance, the FDA admitted it has not reviewed data on the use of ivermectin to treat or to prevent COVID-19, pointed out the Front Line COVID-19 Critical Care Alliance, which said that to do so is to "ignore the growing body of scientific evidence from peer-reviewed research, over 40 medical trials, and results from Ivermectin’s use in medical settings worldwide, showing the safe and effective use of the drug in fighting COVID-19."

The WHO stated March 31 that the "current evidence on the use of ivermectin to treat COVID-19 patients is inconclusive," and until more data is available, "recommends that the drug only be used within clinical trials."

The American Association of Physicians and Surgeons has pushed back on the American Medical Association's advice that physicians not prescribe ivermection for COVID-19. In a letter Saturday to AMA President Dr. Gerald Harmon, AAPS Executive Director Dr. Jane Orient charged the AMA is "contradicting the professional judgment of a very large number of physicians, who are writing about 88,000 prescriptions per week."

Can't get rid of the 'dimwits'

In his monologue, Kimmel said there are still "a lotta pam-dimwits out there," as evidenced by the poison control centers that "have seen this spike in calls from people taking this livestock medicine to fight the coronavirus."

However, the reports suggesting it's a serious problem have not panned out.

The Associated Press, for example, had to issue a correction to an article published in late August that claimed 70% of calls made to the Mississippi Department of Health were from people who had ingested the livestock version of Ivermectin, the Daily Wire reported.

Epidemiologist Dr. Paul Byers said the number of calls to poison control about ivermectin actually was about 2%.

One week ago, Rolling Stone and Rachel Maddow repeated an Oklahoma doctor's claim to media that the emergency rooms in the state were overwhelmed by patients who had taken the livestock version of Ivermectin, forcing gunshot victims to wait.

But the hospital highlighted in the story said the doctor had not worked there for more than two months, and it had not had any cases of ivermectin ingestion.

Kimmel, Tuesday night, also said that "one the reasons these Seabiscuits are opting for ivermectin is because they don't trust Big Pharma, which is fine I guess except for the fact that ivermectin is made by Merck, which is the fourth largest pharmaceutical company in the world. And even Merck is telling people to cut it out."

He then flashed a statement from Merck discouraging ivermectin's use for treating COVID-19.

"Listen, if a pharmaceutical company says, 'Please don't take the drug we're selling,' you should probably listen to them — or you can just go with the Tik-Tok posted by the disgraced veterinarian instead," he said. "Meanwhile these poor horses are like, 'Hey, I have worms; I need that stuff. There are worms in my butt, you understand?'"

However, as The Blaze point out, Kimmel didn't mention that Merck is working on a "COVID pill" that would compete with the relatively cheap ivermection.