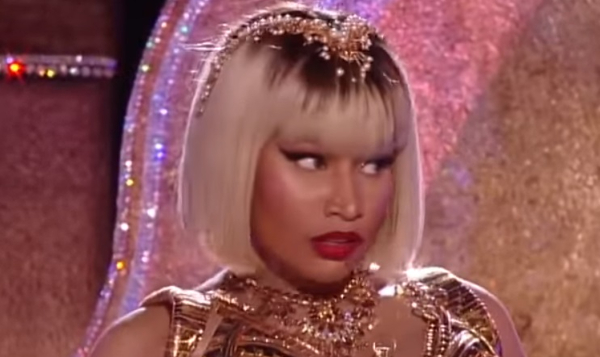 A reporter shouted a question to President Biden at the White House on Thursday after his speech on the economy, apparently wanting to know what it means when a celebrity with the influence of rapper Nicki Minaj not only questions the safety of the COVID vaccines but also criticizes the censorship surrounding the issue.

After igniting a media firestorm on Monday urging her 22 million Twitter followers to pray about whether they should get a COVID-19 vaccine, Minaj on Wednesday told her more than 150 million Instagram followers that Twitter suspended her account. And she vowed never to use the social media platform again.

Twitter denies that it suspended her account, but Minaj's description of the shutting down of voices like hers -- comparing it to her experience in China -- is resonating across the political spectrum.

She recalled visiting the communist nation, where she was told "you cannot speak out about the people in power."

Minaj said she understood that China is not the United States, and the government there and its laws are different.

"But don't y'all see what's happening?" she asked. "Don't y'all see that we are living now in that time where people will turn their back on you for not agreeing? But people will isolate you if you simply speak and ask a question."

On Monday, Minaj caught the attention of the White House when she wrote on Twitter that had serious questions about the safety of the vaccines after a cousin in Trinidad told her of a friend whose testicles became swollen after getting the shot. She urged her followers to pray about whether or not they should get the vaccine.

"Are you all forgetting there was a time not too long ago when you couldn't even make eye contact with people? And you're OK with what's happening -- we're no longer even allowed to voice our opinions or to ask questions?"

She said what's "interesting" is that "so many of your favorite artists feel this way but they're afraid to speak up."

After her tweet Monday, Minaj was accused of spreading misinformation, including by MSNBC's Joy Reid, who blasted her Tuesday on her daily show.

But the rapper got the support of Fox News' Tucker Carlson, who pointed to what he sees as the core issue.

"It's not anything to do with the physical effect of the vaccine that makes our political class mad – it's the last part of Nicki Minaj's tweet that enraged them," he said on his "Tucker Carlson Tonight" show. "The part where she says you should pray on it, make the decision yourself like a free human being, and quote 'don't be bullied.'"

Minaj reacted to a Twitter user who criticized her for posting video of Carlson's remarks and called the Fox News host a "white nationalist."

"I can't speak to, agree with, even look at someone from a particular political party," Minaj said. "Ppl aren't human any more. If you're black & a Democrat tells u to shove marbles up ur ass, you simply have to. If another party tells u to look out for that bus, stand there & get hit."

Right. I can’t speak to, agree with, even look at someone from a particular political party. Ppl aren’t human any more. If you’re black & a Democrat tells u to shove marbles up ur ass, you simply have to. If another party tells u to look out for that bus, stand there & get hit https://t.co/OhjQZCbmBa

On Wednesday, Minaj told her more than 150 million Instagram followers she was put in "Twitter jail" and will never use the social media platform again. Twitter followed up with a statement insisting it had taken no action against her account.

"I'm in Twitter jail y'all," the artist proclaimed on Instagram. "They didn't like what I was saying over there on that block, I guess my poll was gonna be asking questions is OK I like being fkng dumb then boom. Can't tweet."

Minaj said Tuesday that in response to her tweet Monday, the White House had invited her to visit.

The White House confirmed to Fox News the invitation.

"As we have with others, we offered a call with Nicki Minaj and one of our doctors to answer questions she has about the safety and effectiveness of the vaccine," a spokesman said.

Minaj said she plans to go to the White House, where she will "ask questions on behalf of the ppl who have been made fun of for simply being human."