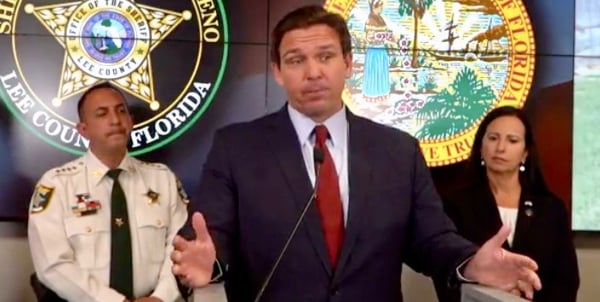 Charging that the "ideological" Biden White House has enacted a "destructive and illegal" catch-and-release immigration policy threatening the safety and well-being of Florida's citizens, Republican Gov. Ron DeSantis filed a lawsuit Tuesday against the federal government on behalf of his state.

The governor charged Biden is sending unscreened immigrants to Florida on purpose.

DeSantis said the federal government is "farming out people all across communities across the United States, including here in Florida."

"This is absolutely a crisis. It's a crisis of the administration's own making," he said. "This continued release of folks on a very mass scale and unprecedented scale will saddle states and local governments with health, financial, economic and public safety costs."

He said "the numbers speak for themselves."

"That's the highest monthly total in more than 20 years and there’s no sign of it slowing down,” DeSantis continued said. "You have another 208,000 in August, and that was again close to another record. Additionally the number of illegal aliens who were issued a notice to appear in court and subsequently released by the border patrol, which means they’re not actually going to appear, in July alone was a staggering 60,607."

DeSantis also has clashed with Biden over COVID-19 policy, with the president calling out the governor recently for protecting the right of parents to decide whether or not their children should wear masks at school.

On Monday, the Florida governor, regarded as a top candidate for the 2024 GOP presidential nomination, directed the state secretary of state's office to investigate Facebook.

Citing a Wall Street Journal report earlier this month, DeSantis wants to know whether the social-media giant violated any of the state's election laws through a program that gives favored treatment to some candidates.