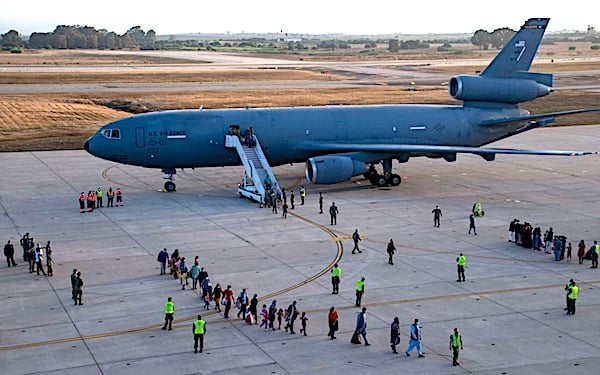 The U.S. State Department will not give official approval to any private evacuation flight from Afghanistan seeking to land in third countries, leaked emails obtained by Fox News show.

“No independent charters are allowed to land at [Al Udeid Air Base], the military airbase you mentioned in your communication with Samantha Power,” a State Department official said in a Sept. 1 email to Eric Montalvo, who organized a number of charter flights out of Afghanistan, Fox News reported.

“In fact, no charters are allowed to land at an [sic] DoD base and most if not all countries in the Middle Eastern region, with the exception of perhaps Saudi Arabia will allow charters to land,” the department official wrote. “You need to find another destination country, and it can’t be the U.S. either.”

Secretary of State Antony Blinken said on Tuesday the department was working “around the clock” to take care of “any roadblocks” so that all charter flights “carrying Americans or others to whom we have a special responsibility can depart Afghanistan safely.”

“Without personnel on the ground, we can’t verify the accuracy of manifests, the identities of passengers, flight plans, or aviation security protocols,” Blinken said. “So this is a challenge, but one we are determined to work through. We’re conducting a great deal of diplomacy on this as we speak.”

White House Press Secretary Jen Psaki concurred, saying that while the administration is “in touch with American citizens directly, beyond that, we don’t have an assessment of manifests, what security protocols and measures are taken” at a press briefing Tuesday.

“To be clear, we are doing everything we can to facilitate these flights,” a State Department official told the Daily Caller News Foundation in a statement.

The department acknowledged in the leaked email that some host countries “may require” the U.S. to sign off on charter flights before accepting them, but that the department “will not provide an approval,” Fox News reported.

The email also made clear the department would offer “‘no objection’ to the destination country government via the U.S. Embassy in that country.”

“If we can get aircraft in and pick up people and bring them out, why can’t we take them to Doha to the refugee center or other refugee centers?” Clay told Fox News. “This makes no sense.”