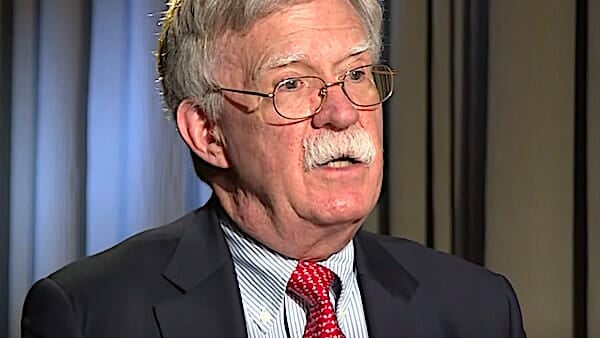 A former security adviser to President Donald Trump is warning that with the Taliban now in control in Afghanistan, combined with the terror organization's close ties to Pakistan, that nation's stockpile of nuclear weapons would be within the reach of the Islamic radicals.

A report in the Daily Mail explained that former Trump adviser John Bolton said in an interview with WBAC on Sunday that Pakistan's arsenal, estimated at up to 150 nukes, could end up in the hands of the Taliban.

"The Taliban in control of Afghanistan threatens the possibility of terrorists taking control of Pakistan … that means maybe 150 nuclear weapons in the hands of terrorists," Bolton warned.

That threat would be on top of what already is known about President Biden's abrupt withdrawal of American troops from Afghanistan: Left behind were dozens of Americans to find their own way out, or face the possibility of becoming hostages to the Taliban, perhaps thousands of Afghans who helped the U.S. mission there, facing possible execution, and tens of billions of dollars of American war machinery left behind for the Taliban to have.

Bolton served under then President Donald Trump between April 2018 and September 2019 and said in the interview Biden's chaotic results in Afghanistan have allies "wondering if he has a grip on his own administration's foreign policy."

An ISIS offshoot launched a suicide bomb attack on the Kabul airport while American forces, who at Biden's orders already have given the Taliban the Bagram air base, were trying to help refugees flee the country. Thirteen American service members died.

"There were still at least 250 American citizens stranded on the ground and thousands of Afghan allies – SIV applicants are those designated as vulnerable – left to face the Taliban," the report said.

The images of the results of Biden's orders were indelibly imprinted on those who followed the events: men who had been clinging to the outside of jets as they took off, in their desperate attempts to flee, falling to their deaths, and babies being handed by their families over security fences in the hope they would be taken out of Afghanistan for a better life.

Biden's version of the events was that it was an "extraordinary success."

The warning from Bolton came after the Taliban already had taken control of U.S. equipment left behind, equipment they brought out for parades after taking over Afghanistan.

The Taliban long has had links to Pakistan and its Islamic government.