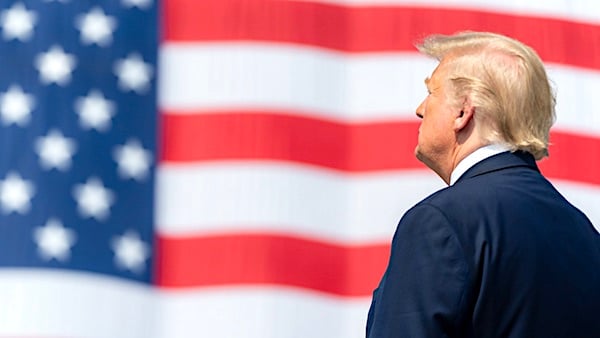 The results from Rasmussen Reports shows that given a second chance at Election Day, voters now would pick President Donald Trump over Joe Biden 51%-41%.

"Just 247 days since President Joe Biden took the keys to the Oval Office, a majority of people appear to want him evicted and former President Donald Trump back," Bedard explained.

"And by a country mile."

Key was the fact that independent voters "overwhelmingly" said they would go for Trump, by 20 points.

And Democrats? Those from gaffe-plagued Joe Biden's own party?

Trump, against a Vice President Kamala Harris, would win 52%-39%.

Trump 2024 Would Beat Either Biden or Harris

One-in-five Democrats say they would vote for Trump over either Biden or Harris ... pic.twitter.com/GAIotGYAsw

Rasmussen said the survey of 1,000 U.S. Likely Voters was done Sept. 21-22 and the margin of sampling error was plus or minus 3 percentage points.

The turnaround comes after Biden took office and created a crisis at the southern border by canceling President Trump's border security programs. Then there's also the Afghanistan withdrawal catastrophe where Biden left behind, to be under the thumb of terrorists in the Taliban, hundreds of Americans and thousands of Afghans who had helped the U.S. there.

And tens of billions of dollars worth of American war machinery.

Then there's inflation that's hitting all Americans in their wallets. There's his party's attempt to take over all elections. And his party's COVID mandate agenda, as well as its pro-abortion agenda.

And voters probably remember that a Media Research Center poll shortly after the election found that nearly one-third of voters who chose Joe Biden were not aware of the evidence linking the former vice president to corrupt financial dealings with China and other nations through his son. Hunter. Had they known, according to the survey, President Trump would have won at least 289 Electoral College votes.

Bedard reported, "The survey is the latest of dozens that have shown Biden sinking like a stone. Many have turned south since the disastrous withdrawal of U.S. forces and diplomats from Afghanistan and the surge of illegal immigrants over the U.S.-Mexico border.

"Others have shown that people are growing worried about Biden’s competence and ability to stay in office long enough to run for reelection."

Trump already has hinted several times that he might run in 2024, promising a decision is coming soon and his fans will be very "happy."

They, by a 56%-40% margin, said "I’m coming to appreciate Trump more, and I’m thinking we need a bit more of Trump’s toughness right now."