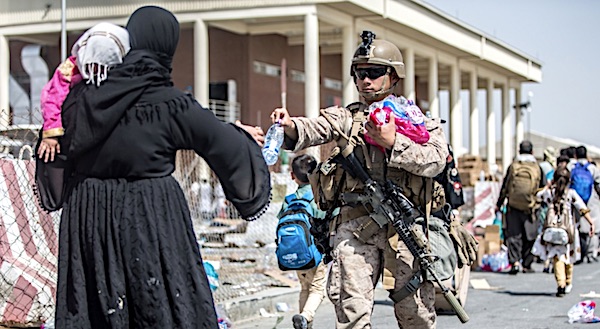 Evangelical superstar James Dobson, the founder and chief of the James Dobson Family Institute, the host of the "Family Talk" radio program, and adviser to multiple presidents on family issues, is urging his supporters to demand members of Congress see that a full investigation of "the many failures in Afghanistan" be done.

"I'll say it again for emphasis: Unless we identify the incompetent and foolish decision-makers who created the mess we are in today, those responsible for it may still be in power when the next crisis occurs. In that case, the past will be prologue," he wrote in his latest monthly newsletter to supporters.

He said for Christians, prayer is the best resource.

But he said there are other things to do, too.

"It is obvious that the mainstream media has decided to 'move on' from the tragedy of Afghanistan. They apparently believe it undermines their narrative of what happened and why. Thus, it is likely that there will be no accountability for the mistakes that resulted in the needless deaths of 13 U.S. service members and more than 180 desperate Afghans who perished on a street in Kabul."

And he said "Neither Democrats nor Republicans appear eager to find out why Bagram Airfield was abandoned or why billions of dollars-worth of our state-of-the-art military weaponry and equipment was handed over to some of the most dangerous terrorists in the world."

But he said, given that the Taliban back in the day provided a safe haven for Osama bin Laden and al-Qaida and were responsible for the destruction of the World Trade Center on 9/11, Americans need to know who "engineered" making them stronger.

Dobson cited the reports of devastating tragedies coming out of Afghanistan now: the Christians and other faith minorities being killed in door-to-door searches, Christians being targeted for their faith, borders closed and more.

"Surely, we Christians in America must be praying fervently for these brothers and sisters who are being massacred, even as I write. Their children are being abducted and/or left as orphans. Evil continues to envelop the land of Afghanistan. Only Almighty God can intervene on behalf of the families there," he said.

But there must be accountability, he charged, for what New York Post columnist Miranda Devine said was "one fell swoop" that left America looking "untrustworthy, feckless, and weak."

"Why would those with responsibility for protecting America continue to ignore the dangers it faces? Consider this: The Taliban, al-Qaida, ISIS and other terrorist groups still hope to humiliate and bring down what they call 'The Great Satan.' We are sitting ducks for them as the southern border of the United States stands wide open. Also, since our ignominious surrender in Afghanistan, our politicians and generals have been importing thousands of unvetted Afghans to America and releasing them into the cultural mainstream. Common sense would tell us that there are probably huge numbers of trained terrorists within this hoard who are now planning their next move," he said.

The explanations need to address the "parade of horrors" in Afghanistan.

He warned without holding those responsible accountable, "America could experience something worse than 9/11 in the future."

Dobson has advised five presidents on family matters and was inducted in 2008 into the National Radio Hall of Fame.

He authored more than 70 books including, "The New Dare to Discipline," "The New Strong-Willed Child," "When God Doesn’t Make Sense" and "Bringing Up Boys."