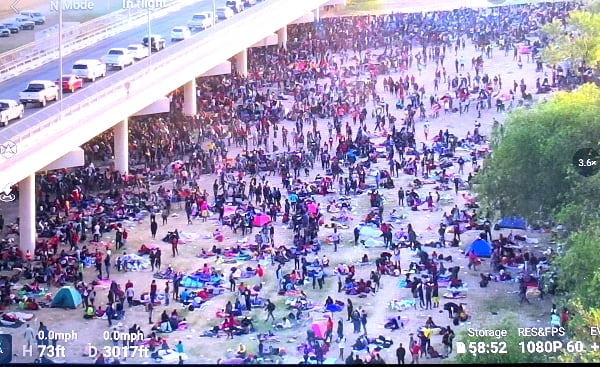 The Biden administration shut down a Fox News drone flying over the U.S.-Mexico border after its cameras showed thousands of people who had crossed illegally into the United States crammed under a bridge, waiting to be processed.

The Federal Aviation Administration, the FAA, said in a statement that "the Border Patrol requested the temporary flight restriction due to drones interfering with law enforcement flights on the border."

The FAA added that "as with any temporary flight restriction, media is able to call the FAA to make requests to operate in the area."

National correspondent Bill Melugin said the "drones spotted masses of migrants crossing from Ciudad Acuna Mexico over a dam in the Rio Grande and into the United States illegally."

"They then stream into Del Rio via dirt path, hundreds coming by the hour with more on the way every day," he said, reporting that the number of people under the bridge had doubled within 24 hours to more than 9,000, according to a law enforcement source who said they mostly were Haitians.

Is the Biden administration desperately trying to hide the border crisis?
99% (386 Votes)
1% (2 Votes)

Two hours later, on "Tucker Carlson Tonight," Melugin broke the news that the FAA had issued a temporary flight restriction (TFR) over the entire area.

He explained to Carlson the order "means our drone can no longer fly and show those images."

"It is a two-week TFR, and according to the FAA, it is for special security reasons. We’ve reached out to the FAA to get a little clarification on what the heck that means," Melugin said.

He added that the "timing on this, the location, a little bit curious" after the Fox New team had been there for seven months.

"All of a sudden, the last 24-hours, we start showing images at this bridge and a TFR goes up, we can no longer fly."

NEW: We’ve learned that the FAA just implemented a two week TFR (Temporary Flight Restrictions) over the international bridge in Del Rio, TX, meaning we can no longer fly our FOX drone over it to show images of the thousands of migrants. FAA says “special security reason”. pic.twitter.com/aJrjAPO2Pz

Carlson told Melguin "our company will ignore the FAA."

"They have no right to shut down newsgathering," he said. "They don't own the news."

'This is unsustainable'
On Friday, Melugin was able to report from the air aboard a Texas Department of Public Safety helicopter.