The scene was unforgettable. Thousands of ultra-Orthodox, Hasidic Jews holding hands and dancing fervently in the streets. An endless stream of upbeat songs in Hebrew and Yiddish. (Literally, it was without interruption, for several hours.) Thousands of Hasidic women, crowded side by side, watching the event with joy. Yellow flags proclaiming "the Rebbe" as the Messiah (more on that in a moment). And then the blue flags proclaiming, "Trump 2024." I kid you not.

I was there in Crown Heights, Brooklyn, Sunday night for the final night of the biblical Feast of Tabernacles (Sukkot in Hebrew), culminating in hours of celebration and dancing. My dear friend (and frequent debating opponent) Rabbi Shmuley Boteach had urged me to attend, since I was in the New York-New Jersey area for the weekend.

And, as fellow Jews, Shmuley an Orthodox Jew and I a Messianic Jew, we joined in the dancing and celebration. It truly was a moving, joy-filled experience.

And, of course, we talked about life and faith and religion, also discussing our differing views on the identity and role of the Messiah.

But our discussion was very specific, since the group that we were with, which is the group through which Shmuley was ordained as a rabbi, is known as Chabad Lubavitch.

They are now the world's largest Jewish outreach and education organization, spanning the globe with their zealous activities. And to this day, many of their leaders and adherents still believe that their leader, Menachem Mendel Schneerson (better known as "the Rebbe"), who died in 1994, is the Messiah.

So, contrary to traditional Jewish belief, which says that the Messiah will not die before he completes his mission (this is dismissed as a "Christian" idea), these fervent Jews believe that their deceased leader is the Messiah.

Banners with the Rebbe's face adorn the streets, proclaiming in Hebrew, "Welcome King Messiah." A prayer posted on a large banner in the main synagogue wishes him long and continued life, speaking of him as "our Master" and "our King." (For my book on this subject, comparing the Rebbe as Messiah to Jesus as Messiah, see here.)

Shmuley told me that, on this, the last night of dancing and celebrating, we could expect to see more of the yellow flags coming out, simply saying, "Moshiach" (Messiah) in Hebrew and in English. And sure enough, as the night wore on, more and more of the flags were seen in the midst of the dancing crowds.

Remember that this was not a political rally, this was a spiritual gathering. And other than singing praises to God, the only other figure getting attention was the Lubavitcher Rebbe, arguably the most influential Jewish leader of the 20th century.

Of course, non-Lubavitch Jews would protest this focus on a deceased leader. But it is part of Lubavitch's religious culture and central to the Messianic beliefs of many of their adherents. In that light, the "Moshiach" banners were fully expected.

And, on the political end of things, the fact that these ultra-Orthodox Jews were so fervently pro-Trump is not that surprising, given that their voting patterns now resemble those of evangelical Christians. (See here for more on this.)

But why on earth were they swinging "Trump 2024" flags at the culmination of Sukkot?

I understand it is a time of great celebration. But again, this is a totally spiritual, non-political event. And where did they even get these flags? Shmuley wondered aloud as to whether they had them specially made up, since we weren't aware that Trump 2024 paraphernalia was being widely distributed at this point. 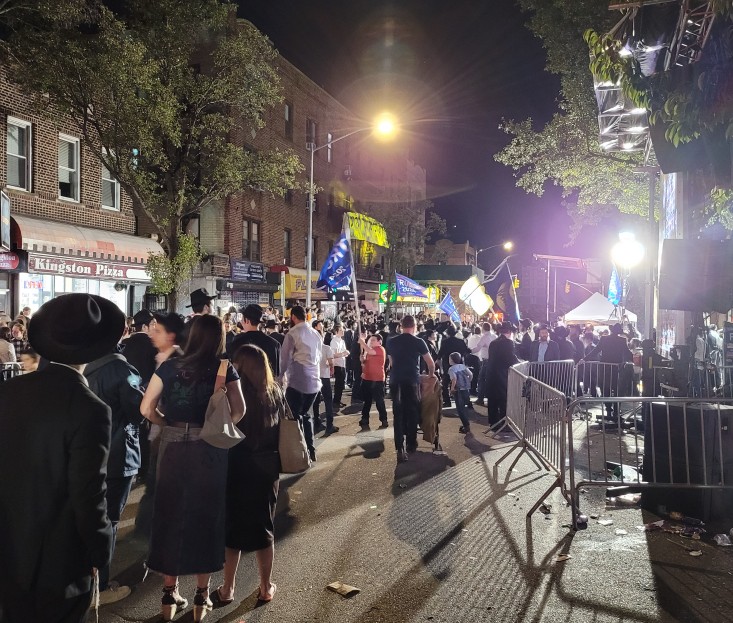 Of course, just as Christians never for a moment confused Trump with Jesus, as if Trump was their Savior or Lord, or as if Trump died for their sins, so also these Hasidic Jews would never confuse Trump with their Rebbe. Not in a million years.

At the same time, just as Christian prayer rallies shouting, "Jesus! Jesus!" could in the next breath shout, "Trump! Trump!" so also the appearance of these yellow and blue flags side by side was quite telling. And as far as I could see, there was not a syllable of protest about the presence of the Trump flags.

Hopefully, if he does decide to run again in 2024, whether or not we vote for him, our perspective will be a whole lot more sober this time around.

Michael Brown
Dr. Michael Brown (www.askdrbrown.org) is the host of the nationally syndicated "Line of Fire" radio program. His latest book is "Revival Or We Die: A Great Awakening Is Our Only Hope." Connect with him on Facebook, Twitter, or YouTube.
@DrMichaelLBrown
Is the church ready for Trump 2024?
Agreeing to disagree about 'NAR' (the New Apostolic Reformation)
Is Christian nationalism dangerous?
Should we emulate the table-flipping Jesus?
Have we been fair-weather friends of Donald Trump?
See more...