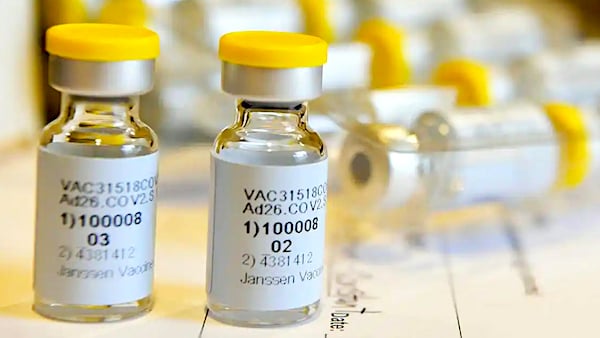 An executive for Johnson & Johnson has warned against consumers getting his own company's COVID-19 vaccination, even though the federal campaigns right now are to make the unvaccinated "a second-grade citizen."

The irreverent comments come from Brandon Schadt, a regional business leader for the company that is one of several of the big companies providing vaccinations against COVID-19, and also a Johnson & Johnson scientist named Justin Durrant.

The comments were caught by an undercover video interviewer working with Project Veritas.

It's the third video in the Project Veritas video series about COVID.

Durrant laughs at the idea of discriminating against unvaccinated adults.

"Inconvenience [the unvaccinated] to the point where it’s like, ‘I might as well just f------ do it [and take the COVID vaccine],’ you know what I’m saying? Like ‘I can’t go out of state,’ I can’t – ‘my grandma’s in Canada and I can’t visit her,’ you know what I’m saying? You can’t go to France unless you’re vaccinated -- you know you’ve just got to keep doing things like that where you’re almost like a second-grade citizen if you’re not vaccinated, but I know that’s awful."

Durrant made clear those unvaccinated are "Like a second-grade citizen, like you can’t do anything that a normal citizen can do."

He continued, "Only way people really act and comply is if it affects their pockets, like if you’re working for a big company and you’re going to lose your job, best believe you’ll be the first one in line [to take the COVID vaccine]."

But he doesn't recommend his own company's product, explaining, "Don’t get the Johnson & Johnson [COVID vaccine], I didn’t tell you though."

Both Durrant and Schadt say giving the COVID vaccine to children would make no difference.

"It's a kid, you just don’t do that, you know? Not something that’s so unknown in terms of repercussions down the road, you know?" Schadt warned, stringing together a list of offensive words to emphasize his point.

Project Veritas earlier released the comments from an economist for the Food and Drug Administration who was demanding forced COVID-19 vaccinations for Americans.

In the video, economist Taylor Lee calling for a registry for all unvaccinated Americans, too.

Project Veritas explained, "Lee said that U.S. government policy could emulate Nazi Germany when it comes to the COVID vaccine."

"Census goes door-to-door if you don’t respond. So, we have the infrastructure to do it [forced COVID vaccinations]. I mean, it’ll cost a ton of money. But I think, at that point, I think there needs to be a registry of people who aren’t vaccinated. Although that’s sounding very [much like Nazi] Germany," Lee said.

"Nazi Germany…I mean, think about it like the Jewish Star [for unvaccinated Americans]," he said.

His wild strategies didn't top there, either.

"Go to the unvaccinated and blow it [COVID vaccine] into them. Blow dart it into them," he said. "I'm gonna go door-to-door and stab everyone [with the COVID vaccine], 'Oh, it’s just your booster shot! There you go!'"

And the concept of internment was also there.

"So, if you put every anti-vaxxer, like sheep, into like Texas and you closed off Texas from the rest of the world, and you go, 'Okay, you be you in Texas until we deal with this [pandemic].'"

His talk also took on a racist tone, when he said, "All of the wealthy white people are getting vaccinated because they're educated."

WND reported the first video in the series featured employees of the U.S. Department of Health and Human Services voicing alarm about the safety of the experimental COVID-19 vaccines, alleging a cover-up of "evil at the highest level."