Anecdotally, and entirely unscientifically, I think I've discovered one of the greatest motivating factors in the world: The desire to be left alone. I don't mean the desire to BE alone (though as an introvert, that's often the case) but to be LEFT alone.

But politicians won't do that. They spend all their time making sure each and every one of us is on their radar, somehow. In fact, they've insured we can all be pegged as criminals. There are so many laws on the books, we can't help but break one or two every time we inhale. Statistics vary, and no one seems able to give a definitive answer, but by one estimate America has 400,000 laws. I remember reading that 40,627 new laws were implemented in 2010. And yet we watch politicians – over and over again – violate the very laws they impose on us.

So what's up with all the laws? Yes we're a diverse society, but surely we don't need so many rules just to go about our daily lives? Why can't they just leave us alone?

Consider these words from Ayn Rand's "Atlas Shrugged" spoken by a character named Dr. Ferris: "Did you really think that we want those laws to be observed? We want them broken. You'd better get it straight that it's not a bunch of boy scouts you're up against – then you'll know that this is not the age for beautiful gestures. We're after power and we mean it. … There's no way to rule innocent men. The only power any government has is the power to crack down on criminals. Well, when there aren't enough criminals, one makes them. One declares so many things to be a crime that it becomes impossible for men to live without breaking laws. Who wants a nation of law-abiding citizens? What's there in that for anyone? But just pass the kind of laws that can neither be observed nor enforced nor objectively interpreted – and you create a nation of law-breakers – and then you cash in on guilt. Now, that's the system, Mr. Rearden, that's the game, and once you understand it, you'll be much easier to deal with."

There's no way to rule innocent men. Think about it. In the eyes of those in power, not one of us can be allowed to be innocent. Ever.

Because of this, the Powers that Be will not leave us alone. I saw an eerie quote recently as follows: "The most terrifying force of death comes from the hands of 'Men who wanted to be left alone.' They know that the moment they fight back, the lives as they lived them are over. It is a small form of suicide, as they are literally killing off who they used to be. Which is why, when forced to take up violence, these 'Men who wanted to be left alone' will fight with unholy vengeance against those who murdered their former lives. They fight with a raw hate, and a drive that cannot be fathomed by those who play-act at politics and terror. True terror will arrive at the Enemy's door, and they will scream, cry, and beg for mercy, but it will fall on deaf ears. For these men simply wanted to be left alone." 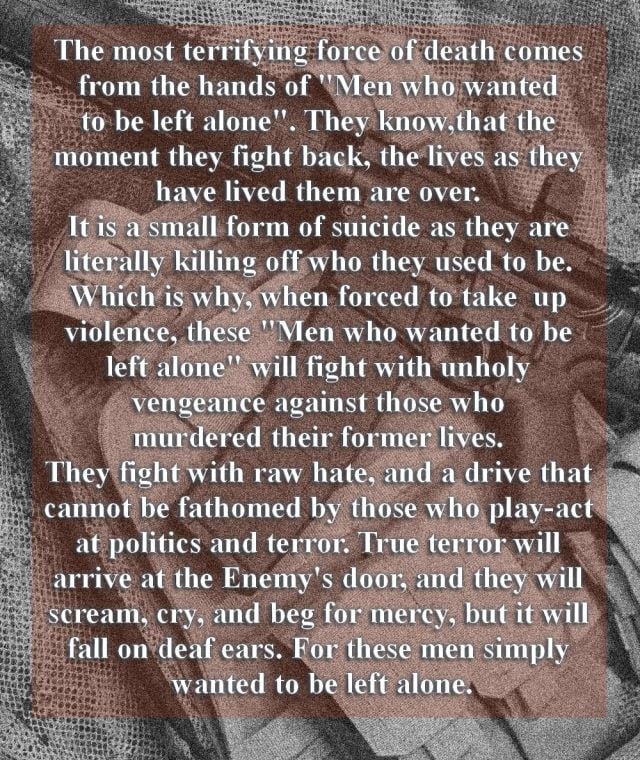 To some extent, this is what's currently happening in Australia. People who simply want to be left alone are pushing back. If that desire is not honored, things could get very ugly.

In short, never underestimate the power of people who simply want to be left alone.

In a brief essay, a man named Wes Rhinier – whose wife is about to lose her nursing job due to vaccine mandates – echoes the sentiment above. He wrote: "It is a declaration of War against me and my family as far as I am concerned, and I know of only one way to respond should this come to pass. It will be time to eliminate these communists, actually it is well past time, but I am but one man. However I aim to erase their existence from History. No Mercy! No Prisoners! No Exceptions! Like a cancer, the communists need to be cut out and put down from the whole world in the hopes that they never rise again. Otherwise, these attacks on us will never end. They hate us and they want us dead. Fine I accept your challenge. Come and try."

Remember, this is a man who simply wants to be left alone. He has just about reached his breaking point. How many other people does he speak for?

I have great respect for the Rule of Law. I have no interest in an anarchist anything-goes society. But have we crossed the threshold? What happens when the government becomes like a predator stalking us on the African plains?

This desire to be left alone applies to both sides of the political spectrum. Sure, there's a small percentage (on both ends of the political spectrum) who are rabid activists, but they're in the minority. It seems everywhere we turn, things are spiraling out of control. According to the Washington Times, "A new CNN poll finds that 74% of U.S. adults now say they are 'very or somewhat angry' about the way things are going in the U.S. today – that includes 88% of Republicans, 70% of independents and even 67% of Democrats."