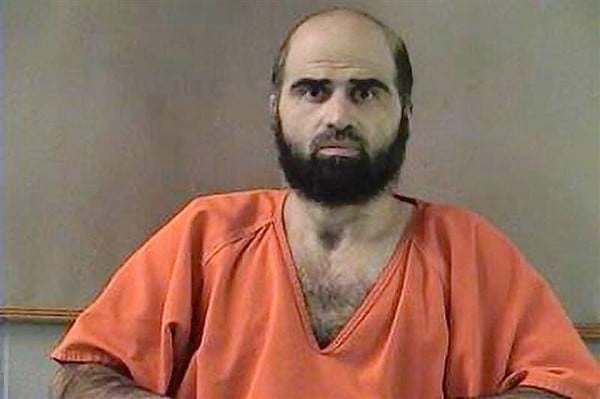 A mass murderer who killed 14 and injured another 43 during his Islam-inspired assault on U.S. soldiers at Fort Hood in 2009 has asked his lawyer to convey to the Taliban his congratulations for the terror group's takeover of Afghanistan.

That happened after President Biden ordered the abrupt withdrawal of American troops, a move done so quickly Americans and U.S.-supporting Afghans were left stranded to deal with the rule of radicals in the Taliban.

Also left behind were billions of dollars in U.S. war machinery, including weapons, aircraft, vehicles and supplies.

The Washington Examiner reports the message came from Nidal Hasan, a former U.S. Army major who called himself a "soldier of Allah" when he went on a deadly rampage at Fort Hood and shot and killed more than a dozen.

He asked his lawyer, after boasting that "We Have Won!!!" to communicate to the Taliban with this message:

"All Praises be to All-Might Allah! Congratulations on your victory over those who hate for the Laws of All-Might God to be supreme on the land. I pray to Allah that He helps you implement Shariah Law fully, correctly, and fairly. We must learn from the nations of the past and not let our wretchedness over come us thus earning His (God's) wrath. It is to All-Mighty God we give thanks!"

The Examiner said it obtained access to the letter exclusively.

After Hasan was radicalized and killed Americans, the Barack Obama administration "stubbornly" refused to classify the attack as terrorism, instead claiming it was "workplace violence," the report said.

That action made victims ineligible for the Purple Heart and other benefits, and Congress later intervened to restore some justice to the victims.

Hasan was convicted in 2013 and sentenced to death.

Reports also have emerged this week that some members of the Taliban leadership now running Afghanistan were freed from American custody by Obama in a swap in which the U.S. got back "U.S. Army deserter Bowe Bergdahl."

The report explained that Hasan had exhibited warning signs of being a danger, including that he corresponded with Anwar al-Awlaki, a wanted terrorist, and talked about "killing fellow U.S. soldiers."

A later report from the U.S. Senate Committee on Homeland Security and Government Affairs described Hasan as a "ticking time bomb" and scolded the FBI and Department of Defense for not recognizing him as a threat.