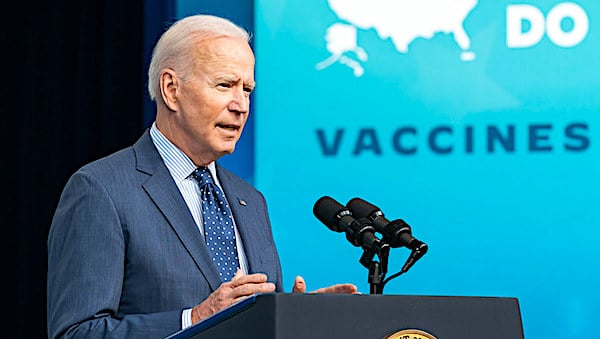 American voters overall by a large margin are rejecting President Biden's claim to have the authority to force private companies to demand their workers submit to the experimental COVID-19 vaccines now in use across the nation.

Asked in a new poll by Convention of States Action, in partnership with The Trafalgar Group, whether Biden has the constitutional authority to impose that demand, 58.6% said no.

The poll, taken over the weekend of likely general election voters, has a margin of error of 2.96%.

But independents joined Republicans in disputing that opinion.

More than 68% of independents said Biden lacks that power, joining 83.5% of Republicans in that opinion.

"The numbers are clear, the American people passionately oppose Biden’s vaccine mandate, and will not tolerate a president elected by the people acting like a dictator or king. They know full well that this precedent will quickly lead to an end to our republic and the beginning of an oppressive new tyranny," said Mark Meckler, president of Convention of States Action. "Our citizens stand squarely with courageous, principled governors who know this isn’t about health, science, or compassion, it’s a naked political power grab."

Does the president have the authority to mandate vaccinations on Americans?
2% (9 Votes)
98% (355 Votes)

The poll showed overall, only 29.7% think Biden does have such power, among independent that falls to 21%, and among Republicans that's 10.7%.

Fifty-six percent support those projects, including 46.3% who "strongly support" the work.

Even 29.8% of Democrat voters support the efforts of state governors to oppose Biden’s nationwide vaccine mandate on private businesses.

Further, the report said, "55.5% of American voters believe President Biden’s national vaccine mandate sets a precedent that could be abused by future presidents on other issues, including 58% of independents, 79.5% of Republican voters and 30.4% of Democrats.

There is significant resistance to the vaccines because of their status as experimental, the documented side effects that have happened, and the fact that they all were developed or tested using cell lines from aborted babies, a fact that creates a moral dilemma for huge numbers of Christians.