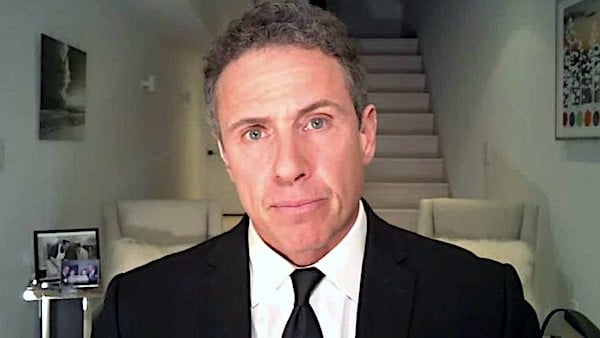 Now Chris Cuomo, the CNN host and brother of failed New York Gov. Andrew Cuomo, who fled after he was accused in an attorney general report of sexually harassing 11 women, has been accused of sexual harassment.

Just the News reported Shelley Ross, a former ABC executive producer, has detailed for the New York Times an incident "from years ago" when Chris Cuomo allegedly sexually harassed her "in front of her husband and their colleagues."

Ross wrote about the situation, which allegedly happened in a bar, "I was at the party with my husband, who sat behind me on an ottoman sipping his Diet Coke as I spoke with work friends. When Mr. Cuomo entered the Upper West Side bar, he walked toward me and greeted me with a strong bear hug while lowering one hand to firmly grab and squeeze the cheek of my buttock."

She charged Chris Cuomo then said, "I can do this now that you're no longer my boss."

Ross detailed in her commentary in the Times the situation, and included a picture of an email Chris Cuomo sent her short after, in which he apologized.

"Pass along my apology to your very good and noble husband ... and I apologize to you as well, for even putting you in such a position," he stated.

Ross explained she previously was Cuomo's supervisor on ABC's "Primetime Live," but at that point was working as an executive producer of another program.

Just the News reported she explained, of the apology, "I've always seen it as an attempt to provide himself with legal and moral coverage to evade accountability."

Chris Cuomo, in a statement, responded, "As Shelley acknowledges, our interaction was not sexual in nature. It happened 16 years ago in a public setting when she was a top executive at ABC. I apologized to her then, and I meant it."

During Andrew Cuomo's months-long work to save his political career, Chris Cuomo did not discuss him on his primetime CNN show.

But multiple interests called for CNN to dismiss Chris Cuomo when it was revealed he had been providing advice to his brother during that time.

She wrote, when he left office, "Disgraced Andrew Cuomo abandoned the New York governor's mansion last week, leaving nearly 15,000 dead nursing home residents in his wake as a result of a catastrophic executive order forcing their facilities to take in COVID-19-infected patients. He also left behind a bevy of female underlings with a mountain of sordid sexual harassment allegations. And, reportedly, Cuomo also ditched his poor dog, whom two state troopers claim he tried to pawn off to any willing taker.

"But that's not all.

"In the dark of night, safe from public scrutiny or accountability, Coward Cuomo granted clemency to one of the radical left's most notorious anti-cop convicts – a man whose family's elite privilege I've chronicled for the past 19 years. David Gilbert is the Weather Underground domestic terrorist sentenced to 75 years-to-life in prison for his role in the infamous 1981 Brink's robbery in Nyack, New York. Gilbert and his wife, Kathy Boudin, were leaders in the 1960s group of rich-kid agitators who bombed government buildings and corporate headquarters and aided convicted felons in jailbreaks."

She explained the "married militants" were "chauffeurs" for the Black Liberation Army robbers who held up a Brink's truck and stole millions. Two of the holdup victims who were gunned down were police officers. Another was a private security guard.

Malkin wrote, "I remind you, again, as I have for the past two decades, that police officers Waverly Brown and Edward O'Grady and Brink's guard Peter Paige were murdered during the homicidal siege. Brown, who served in the Air Force after the Korean War, had two grown daughters and a teenage son. O'Grady, who served in the Marines and did two tours of duty in Vietnam, left behind a wife and three children – 6, 2 and 6 months old. Paige, a Navy veteran, also left behind a wife and three kids – 19, 16 and 9."