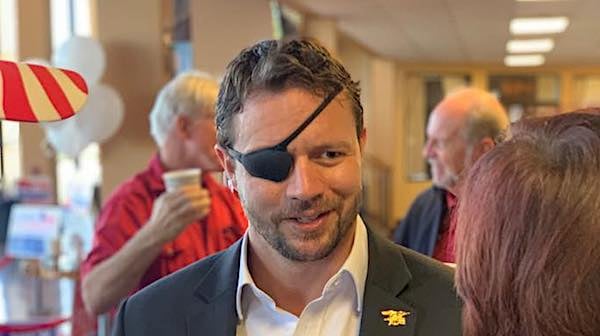 U.S. Rep. Dan Crenshaw, R-Texas, has been fined $5,000 for bypassing House Speaker Nancy Pelosi's metal detectors in the U.S. House in violation of a rule Pelosi also is accused of ignoring.

A report from Fox News explained Crenshaw was accused of refusing to go through the security system installed on Pelosi's orders, and a statement from the House Committee on Ethics confirmed the fine will be deducted from his pay.

The resolution was adopted following the January 6 violence at the Capitol, where thousands who had been attending a rally with President Trump earlier in the day went to the building. A few hundred then broke windows, doors and vandalized various parts of the building.

Since then, Democrats have claimed it was worse than 9/11 and a true threat to the government of the United States itself.

The security installation has been an ongoing source of contention among House members and Crenshaw was among those who called out Pelosi earlier this year for also bypassing the detector – and then not paying a fine.

Georgia congressman Andrew Clyde earlier said he was fined $15,000 for actions similar to Pelosi's, and said then he would sue her.

Clyde explained at that time he broke the rule in order to have standing to sue Pelosi.

Texas Rep. Louis Gohmert has also been fined $5,000 for not going through the metal detector.

The problem with Pelosi not paying a fine developed shortly after she had fined two Republicans.

The New York Post said at the time that members of Congress had observer Pelosi "entering the House Chamber without completing security screening."

"We are demanding she face the same fines as every other member of Congress," the GOP members of the committee said.

According to Fox News, Reps. Rodney Davis, R-Ill., Barry Loudermilk, R-Ga., and Bryan Steil, R-Wis., back then sent a letter to acting House Sergeant-at-Arms Timothy Blodgett requesting he levy fines against the speaker for not following the security protocols all members are required to follow to get to the House floor.

Pelosi said then she was "wanded," and that was all she needed to do to meet security protocols.