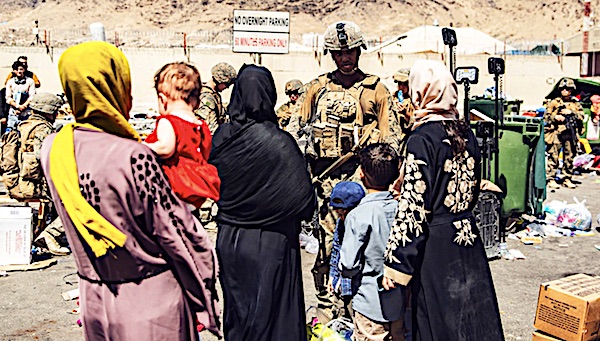 Older Afghan men with young girls they claimed as "brides" were among the people evacuated from Afghanistan by the United States, according to U.S. officials.

Working at intake centers in Wisconsin and the United Arab Emirates, the officials found numerous incidents in which older men presented young Afghan girls as their wives, the Associated Press reported.

In Muslim-majority Afghanistan, child marriage is not uncommon, but the AP pointed out that the U.S. has strict policies against human trafficking, including the prosecution of offenders and sanctioning of nation's that don't crack down on it.

The wire service cited an internal document stating the State Department sought "urgent guidance" from other agencies in response to child brides arriving at Fort McCoy in Wisconsin.

And Afghan girls at a transit site in Abu Dhabi alleged that in order to escape Afghanistan, they were forced to marry older men who had raped them, according to a diplomatic cable.

Officials familiar with the cable say several girls in Abu Dhabi said they had been sexually assaulted by their "husbands."