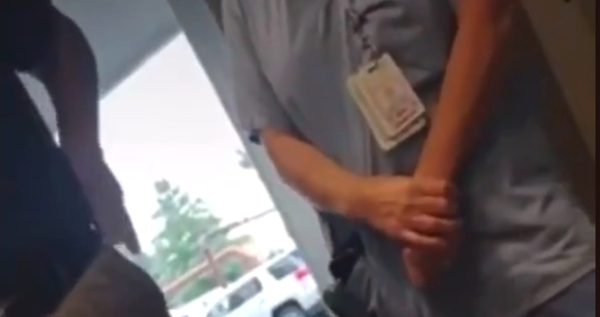 Screenshot from video posted by Kentucky nurse who was terminated for refusing to be vaccinated.

A Kentucky nurse who claims the hospital for which she worked quietly got rid of employees who refused to be vaccinated without a letter of termination or resignation secretly recorded an encounter with administrators as evidence.

Identifying herself to an administrator as Ashley Bridge, the nurse at The Medical Center at Bowling Green is heard arguing she did not quit and did not receive a termination letter.

"You're going to have to leave," the administrator replies in the video, which was posted in TikTok.

"No," the nurse responds. "On what grounds?"

"You do not want this to get ugly," the administrator warns.

Another hospital worker is heard saying she was not allowed to clock in that morning.

The director of security for the hospital arrives, demanding they turn in their badges and leave.

But he acknowledges that not being vaccinated is the reason the two can't come back to work.

He asks the nurse's colleague, "And you didn't get the vaccine either?"

After the nurse argues they weren't given a choice, the security director says, "There was a choice; you chose not to take the vaccine."

The video was posted Sept. 3,  the day employees protested against the vaccine requirement outside the Bowling Green hospital.

A sonographer at the hospital confirmed the nurse's experience.

"So not having gotten my vaccine, I was not told whether or not I have a job," Brittany Murphy told WBKO-TV in Bowling Green.

"I did not sign any letter of resignation, so I did not personally resign. I have not been given any forms to fill out, I have not received a letter of termination, so I really don’t know what my status is at this time with the Medical Center," she said.

Remember, hospitals are so overwhelmed, they fire staff for refusing the jab. 🤡 pic.twitter.com/beSMR5qHKa

The medical center released a statement Friday after the video was posted saying it "stands by our decision requiring staff to be vaccinated against COVID-19."

"Since our vaccine requirements were announced in late July, approximately 1,000 Med Center Health staff members have chosen to be vaccinated raising our number of vaccinated staff to over 3,500," the statement said.

The hospital said 180 staff members were terminated due to the vaccine requirement, but it has "welcomed 178 new, vaccinated team members who have or will be joining us within the next week."

However, a hospital in upstate New York said it will stop delivering babies later this month, in part because of employee resignations over a vaccine mandate.

In Florida on Monday, Republican Gov. Ron DeSantis warned that cities and counties in his state that comply with President Biden's mandate and force employees to get vaccinated will be fined $5,000 per infraction.

Gov. Ron DeSantis: "We are fighting back against the Biden mandate... Nobody should lose their job over this issue." pic.twitter.com/11ag082Oan