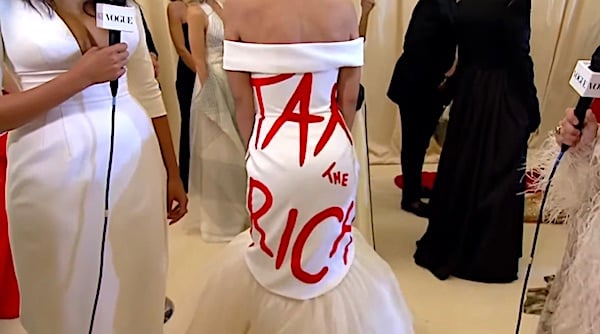 A watchdog organization has filed a complaint with the Office of Congressional Ethics against leftist U.S. Rep. Alexandria Ocasio Cortez, a Democrat from New York, for accepting a free $35,000 ticket to the flamboyant Metropolitan Museum of Art's "Costume Gala."

The member of Congress was in the news for attendance for wearing a designer-created gown that flashed the message "Tax the Rich" across her back and posterior.

The complaint is from the American Accountability Foundation and charges that Cortez accepted "an impermissible gift."

"If during your investigation you discover any possible violations of campaign finance law, we urge you to share that information with the Federal Election Commission," the complaint said.

The AAF charged Cortez with violating "clause 5 of Rule XXV of the Rules of the House of Representatives (commonly known as the Gift Rule) by accepting admission to the Met Gala, an event whose per seat costs is reported to range from $35,000 to $50,000."

The complaint points out that the gift rule is to "govern the conduct of Members and prevent the Members of accepting gifts that result only from their position of public trust and are not widely available to the public."

Specifically, the rule explains a gift is "something with monetary value for which you do not have to pay." That includes "gratuities, favors, discounts, entertainment, hospitality, loans, forbearances, services, training, travel expenses, in-kind contributions, advanced payments, and reimbursements."

Cortez pre-emptively explained she was attending the social event as part of her oversight responsibilities.

"New York officials are routinely invited to and attend the Met due to our responsibilities in overseeing and supporting the city's cultural institutions for the public," she claimed.

"Since Representative Ocasio Cortez is defining her attendance at the Met Gala to be part of her official activities, the receipt of the gift must fall under the widely-attended event or charity event exemptions" to the House rule, the complaint charged.

But the invitation failed to qualify because it was not open to the public, nor was the invitation from the Met itself since an outside, for-profit, organization controls the guest list, the letter explained.

"This year one of the most noteworthy sponsors of the Gala was Instagram, who sponsored a celebrity filled table. Instagram is subject to heavy regulation and legislation in Congress and by sponsoring the secretive invite only Gala, Instagram was able to purchase access to Representative Ocasio-Cortez that is unavailable to average citizens. Further Representative Ocasio-Cortez has yet to disclose who sponsored the table she sat at, a party that would have had extended uninterrupted access to lobbying the representative on any number of policy issues," the letter charged.

The New York Post reported the Office of Congressional Ethics can refer complaints to the House Ethics Committee for further review.

For gifts, House members can only accept $100 worth of items per year from a specific source.