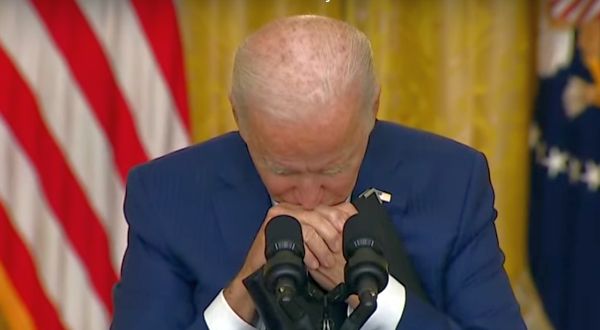 Could the murder of a Lyft driver in Garland, Texas, be the first in a new wave of terrorist attacks spawned by President Joe Biden's disastrous retreat from Afghanistan?

That question was posed by the editorial board of Issues & Insights after an FBI official said Monday that Imran Ali Rasheed might have been "inspired by a foreign terrorist organization" to kill Isabella Lewis and then drive to a nearby police station and begin shooting people inside.

The FBI got involved in the case after local police found a note in the Lyft driver's car.

"What, we wonder, could have 'inspired' Rasheed to go on a killing spree?" the board asked. "Could it be that the humiliating defeat of the U.S. at the hands of the fanatical Taliban has energized Islamic radicals around the world, including in Texas?"

The board noted that U.S. authorities are on "high alert" for threats to the homeland. CNN reported "people already in the U.S., who may be inspired by narratives associated with al-Qaeda, ISIS or other foreign terrorist groups,” and “will view the events in Afghanistan as an opportunity to engage in violence here at home.”

The Economist reported that in the wake of the desperate evacuation and the loss of 13 Americans to a suicide bomber in Kabul, Muslims around the world celebrated.

In Yemen, they set off fireworks. In Somalia, they handed out sweets. And in Syria, they praised the Taliban for providing a "living example" of how to "bring down a criminal regime" through jihad.

James Carafano, a national security expert for the Heritage Foundation, said "the Taliban’s roughing-up of Biden will be a clarion call for transnational terrorism worldwide to get back in the game and go after the West."

"Small wonder that our European allies are outraged," he said.

In 2014, President Barack Obama's withdrawal of U.S. forces from Iraq led to ISIS seizing huge portions of Syria and Iraq, increasing the threat of terrorism in Europe and the United States. Around the world, the number of deadly terrorist attacks spiked from four in 2013 to 106 in 2015.

Jihad Watch director Robert Spencer, who hosted the May 2015 in Garland that was targeted by two Islamic jihadists, noted ISIS issued a call in September 2014 to kill citizens of countries that joined the coalition against ISIS.

The ISIS call to "kill a disbelieving American or European":

So O muwahhid, do not let this battle pass you by wherever you may be. You must strike the soldiers, patrons, and troops of the tawaghit. Strike their police, security, and intelligence members, as well as their treacherous agents. Destroy their beds. Embitter their lives for them and busy them with themselves. If you can kill a disbelieving American or European — especially the spiteful and filthy French — or an Australian, or a Canadian, or any other disbeliever from the disbelievers waging war, including the citizens of the countries that entered into a coalition against the Islamic State, then rely upon Allah, and kill him in any manner or way however it may be….If you are not able to find an IED or a bullet, then single out the disbelieving American, Frenchman, or any of their allies. Smash his head with a rock, or slaughter him with a knife, or run him over with your car, or throw him down from a high place, or choke him, or poison him.