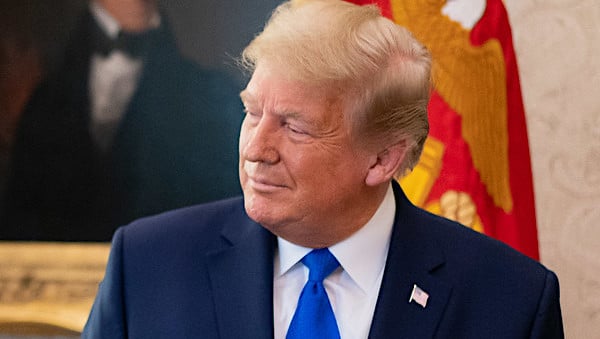 President Donald J. Trump listens as Olympic wrestling champion Dan Gable addresses his remarks prior to receiving the Medal of Freedom to Gable Monday, Dec. 7, 2020, in the Oval Office of the White House. (Official White House photo by Tia Dufour)

President Trump has doubled down on his criticism of Mark Milley, the chairman of the Joint Chiefs of Staff, for behavior that many commentators are describing as traitorous.

That would be his insistence about the time of last year's election that military officials promise to clear through him any military orders from the president. And his telephone calls to China in which he purportedly advised the United States was stable and would not attack.

When word first came about Milley's unorthodox actions, Trump said, "If it is actually true, which is hard to believe, that he would have called China, and done these things and was willing to advise them of an attack or in advance of an attack, that's treason. and I would think…. I've had so many calls today saying that's treason, No. 1, No. 2, it's totally ridiculous. I never thought of it."

Now the Daily Mail reveals Trump followed with a statement describing Milley as a "complete nutjob."

Trump also has some choice words for President Biden, who defended Milley's actions that even Democrat interests have described as completely unacceptable.

Trump said Biden covered for Milley because "dirty secrets" Milley may know about Biden and his "chaotic Afghanistan withdrawal."

Milley has admitted making two calls to Chinese officials, prompting charges he went behind Trump's back.

Trump said, "He put our Country in a very dangerous position but President Xi knows better, and would’ve called me. 'The way Milley and the Biden Administration handled the Afghanistan withdrawal, perhaps the most embarrassing moment in our Country’s history, would not exactly instill fear in China.

"The only reason Biden will not fire or court-martial Milley is because he doesn’t want him spilling the dirty secrets on Biden’s deadly disaster in Afghanistan," he said.

"Milley is a complete nutjob," he said.

Trump also said, "Actions should be taken immediately against Milley, and better generals in our Military, of which we have many, should get involved so that another Afghanistan disaster never happens again. 'Remember, I was the one who took out 100% of the ISIS Caliphate. Milley said it couldn’t be done!

"For the record, I never even thought of attacking China—and China knows that. The people that fabricated the story are sick and demented, and the people who print it are just as bad."

Multiple officials, both GOP and Democrat, have insisted Milley quit – or be court-martialed – for his actions.

Biden said he has "great confidence" in the man many believe committed treason.

The White House press secretary took the opportunity of the controversy to return to the Democrats' talking point that President Trump fomented an "insurrection" at the Capitol in January, even though none of the hundreds arrested there have been charged with insurrection.

Milley’s message for the communist Chinese military reportedly was: "Gen. Li, I want to assure you that the American government is stable and everything is going to be OK. We are not going to attack or conduct any kinetic operations against you. Gen. Li, you and I have known each other for five years. If we’re going to attack, I’m going to call you ahead of time. It’s not going to be a surprise."

Commentator Tucker Carlson explained, "How do you describe this? 'Deep State' isn’t strong enough. It’s treason. It’s a crime. And apparently, Mark Milley isn’t the only person implicated in it. Others knew it was happening. Our intelligence agencies almost certainly heard Mark Milley's call. If they can read emails from a cable news show on Fox, what are the chances they were aware that the chairman of the Joint Chiefs of Staff was speaking to a senior Chinese general and what they were saying? Around 100%. Yet the NSA did nothing. The CIA was clearly fully on board. 'We are on the way to a right-wing coup,' Gina Haspel told Milley."

Milley's comments were revealed in a new book that is being published. The authors said Milley also called another meeting of senior officials at the National Military Command Center. He informed the group that they reported to him, not to the elected president of the United States.

Content created by the WND News Center is available for re-publication without charge to any eligible news publisher that can provide a large audience. For licensing opportunities of our original content, please contact [email protected]org.