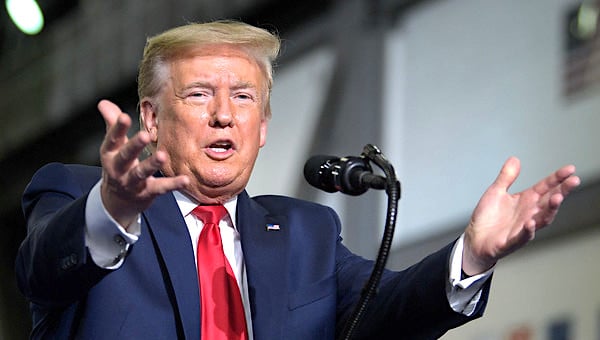 PALM BEACH, Fla. — Mar-a-Lago was eerily quiet. Hurricane shutters still covered many of the windows, and stacks of sod sat waiting to be planted along the main driveway, in preparation for the club’s official Nov. 1 opening. A receptionist ushered me into the official lobby: an expansive room with a soaring ceiling and a majestic view of the club’s western lawn. It was grand, gilded, and gaudy – a fitting expression of Donald Trump’s ubiquitous brand.

After a short wait, one of Trump’s press aides escorted me into a small room with a fireplace, a wooden bar, and a single round table with four chairs. Moments later, the 45th U.S. president entered, shook my hand, and took a seat. A waiter appeared seemingly out of nowhere to present Trump with — what else? — a can of Diet Coke and a glass of ice.

And with that, we were off and running on a free-form 90-minute conversation on topics ranging from China, the war in Afghanistan and COVID-19 to Gen. Mark Milley, George W. Bush, and Bob Woodward’s latest book.

Part 1 of RealClearPolitics’ three-part series on the interview with Trump deals with why Trump exceeded expectations with Hispanic voters in 2020.

“We had the border so perfect,” Donald Trump laments. We’re just a few minutes into our interview at Mar-a-Lago, and he’s already steered the discussion to one of his favorite topics.

“You look at the border, countries are emptying out their prisons, we are like a dumping ground,” Trump says. “This country has changed so much in eight months, more than it has ever changed in its history, in my opinion.”

Trump calls Joe Biden’s handling of the border issue “the most incompetent thing I’ve ever seen” before adding, “until I saw the Afghan withdrawal.”

If Trump’s rhetoric sounds familiar, that’s because it is. When he famously descended on the escalator in Trump Tower on June 16, 2015, to announce his bid for the presidency, he wasted no time in attacking the establishment leaders of both political parties for failing to protect American interests on trade and immigration.

“We are a dumping ground for everybody else’s problems,” Trump said before continuing with his now infamous line about Mexico not sending its “best” people across the border:

The party’s establishment’s proposed solution was a more inclusive way of discussing illegal immigration and throwing its collective weight behind Washington’s “comprehensive immigration reform.” After Trump chose the opposite approach, the conventional wisdom in 2016 was that his tough stance and coarse rhetoric would doom him in the general election. It didn’t.

Why, I ask Trump, did you do so much better with Hispanics in 2020?

“I think they know that I love them. I have great respect for them. They are very entrepreneurial people. Very smart and energetic people, and they see I’m doing the right thing,” he says. “They also know I’m tough on the border, and tough on immigration. And they knew better than anybody else that the border was important. A lot of people thought I was going to hurt myself with the Hispanics with my tough stance on the border. No, they don’t want people coming in taking their jobs, taking their house.”

Trump’s significant gains in majority Hispanic counties along the Texas border were nothing short of eye-popping. He increased his vote share by an average of 26.8% in 17 counties in southern Texas with an average Hispanic population of 88.8%. Trump recalled getting the news about his performance in border counties in a phone call from Gov. Greg Abbott: “He said, ‘We can’t believe it; the numbers you got are the highest anybody’s gotten since Reconstruction. Best numbers we’ve seen since the Civil War.’”

Hispanic voters, Trump says, “understood better than anyone that I was doing the right thing in terms of their lives, the crime, their jobs.” He also reaped massive gains with Hispanic voters in Florida, particularly in the traditional Democratic stronghold of Miami-Dade County.

“The Democrats can’t believe the Hispanic numbers; they never thought they see that,” Trump says. “If you look at the results in Miami: Cubans, Venezuelans, you look at the numbers in Miami — they are through the roof. The Republicans get decimated in Miami, and I almost won Miami and then the rest of the state was mine.”

He's right. Trump won 45% of Hispanics in Florida, including 58% of those of Cuban heritage.  In 2016 he lost Miami-Dade to Hillary Clinton by 30 percentage points. Four years later, he lost the county to Joe Biden by just seven points en route to a three-point victory statewide.

Given his success with Hispanics voters, I ask Trump what the Republican Party should do to hold on to the gains he made as the GOP looks to next year’s midterms and beyond. He responds with the most concise answer of our entire 90-minute interview: “They have to hold on to Donald Trump.”