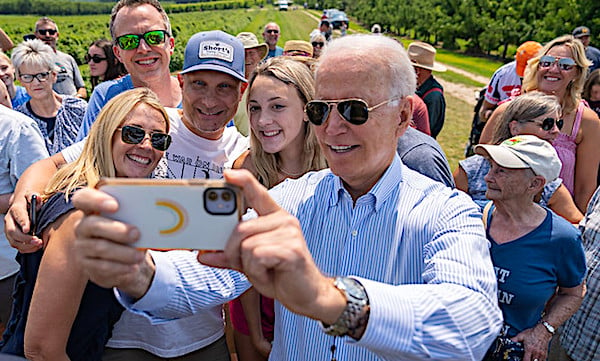 Attorneys representing the Daily Caller News Foundation and Judicial Watch took to court Wednesday arguing for access to records and communications about a treasure trove of documents related to President Joe Biden’s time as Senator housed at the University of Delaware.

The organizations were appealing a January decision by the Superior Court of Delaware which denied them access under the Delaware Freedom Of Information Act (FOIA) to the gift agreement between the university and Biden when he donated his Senate records as well as communications between the university and Biden and his representatives about the release of his Senate records.

The university said it will only make the documents public two years after Biden retires from public life. Oral arguments Wednesday centered on whether documents stored in publicly-funded institutions like universities could be accessed through a FOIA request.

“How the University of Delaware is storing, maintaining, processing, and releasing President Biden’s Senate records is of concern to the citizens of Delaware and all Americans,” President of Judicial Watch Tom Fitton said in a statement to the DCNF. “During today’s hearing, it seemed as though the Delaware Supreme Court is skeptical of the unusual secrecy in the handling of these records by the University.”

Bill Green, the attorney representing the DCNF and Judicial Watch, argued that documents stored in public universities are accessible via FOIA.

“Shelf space has value, utilities have value, real estate has value,” Green said Wednesday, pointing to the 4,000 cubic feet necessary to house more than 30 years worth of documents.

Green argued that the only evidence the University of Delaware submitted proving no public funds were used to house the documents are unsworn statements by university officials rather than affidavits, which he argued are insufficient. He also argued the Delaware Superior Court’s ruling unfairly shifted the burden of proof to the plaintiffs, maintaining that the university, as the custodian of the public documents, had to show that public funds were not used to house Biden’s records.

“The University of Delaware’s argument that a public university housing public records is not subject to public disclosure requirements would be comical if all this weren’t so serious,” Daily Caller News Foundation President Neil Patel said in a statement. “We are hopeful that the court will not allow this attempt to hide President Biden’s rightfully public information to stand.”

Bill Manning, the attorney representing the University of Delaware, argued Wednesday that whether or not state funds were used to house the documents is irrelevant. He maintained that if all documents housed at state expense were accessible under FOIA, that would mean that any and all documents housed in publicly-funded universities could be accessed by the public.

The DCNF and Judicial Watch had each filed FOIA requests for the records in April 2020, arguing that the records should be publicly available as their housing was paid for with public funds. The university denied the request, stating that “[t]here have been no expenditures of public funds regarding or related to the Joseph R. Biden, Jr. Senatorial papers.”

Both the DCNF and Judicial Watch filed petitions in Delaware’s Office of the Attorney General to determine whether the university’s decision violated FOIA, but the attorney general denied both petitions, siding with the university’s position that the records were not related to the expenditure of state funds.

The organizations then filed a joint appeal of the attorney general’s decision, arguing that the housing of Biden’s Senate records at the University of Delaware must have been paid for by public funds and pointing out that the university receives roughly $120 million in state funds each year. However, the ruling was upheld by the Superior Court of Delaware in January.