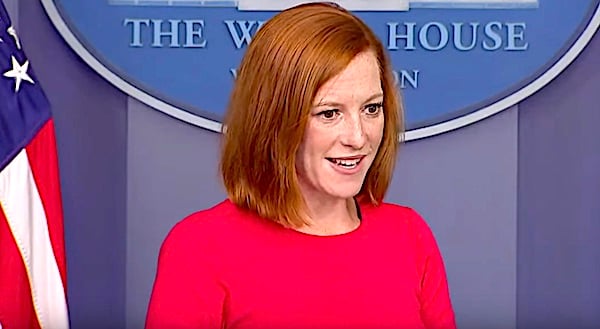 Jen Psaki, the White House press secretary for Joe Biden, is getting some extra attention on the internet after she called COVID-19 a "global plandemic" with the letter L, instead of pandemic.

Her remark came during a press briefing Aug. 25, as she answered a question about Biden's meeting with Israeli Prime Minister Naftali Bennett.

"The president's looking forward to welcoming the prime minister who's already in town, as you know, having a variety of meetings today," Psaki began.

"We expect their conversation to be wide-ranging, to cover a range of topics of mutual interest – everything from COVID-19 and our efforts to address the global plandemic to regional security issues which could include a range of topics including security within Israel as well as, you know, Iran and other issues of mutual concern."

The official White House transcript of the news conference does not reflect what Psaki actually voiced, but printed her remarks as "global pandemic" instead of "global plandemic."

"The quote is crystal clear," noted the National File, adding, "'Plandemic' was the name of a viral but heavily-censored film in 2020 starring whistleblower Dr. Judy Mikovits, which helped to wake people up to the coronavirus scam."

Psaki's video has been posted in a variety of places online, with some interjecting humor, including a clip of actor Will Ferrell seemingly reacting to Psaki in his legendary role of newscaster Ron Burgundy in the film "Anchorman," shown here saying: "What did you say?" and "Boy, that escalated quickly."

She said it lol pic.twitter.com/Z2DwKkgS8U

Populist Press called Psaki's statement: "The most honest thing she's ever said at the podium. Thanks for confirming what so many people have suspected all along, Psaki."

Last August, news broke about how Dr. Anthony Fauci, the director of the National Institute of Allergy and Infectious Diseases, told a gathering of students and experts at Georgetown University Medical Center in January 2017 that the incoming Trump administration would face a "surprise outbreak" of a new disease and the U.S. needed to prepare for it.

"If there's one message that I want to leave with you today based on my experience, is that there is no question that there will be a challenge to the coming administration in the arena of infectious diseases,” Fauci said, two years before COVID-19 was identified, the Western Journal reported.

"The history of the last 32 years that I've been the director of NIAID will tell the next administration that there is no doubt in anyone's mind that they will be faced with the challenges that their predecessors were faced with."

He added, "We will definitely get surprised in the next few years."

Fauci's comments came during the keynote address at "Pandemic Preparedness in the Next U.S. Presidential Administration," as he and other global health leaders encouraged the Trump administration to plan for an outbreak.