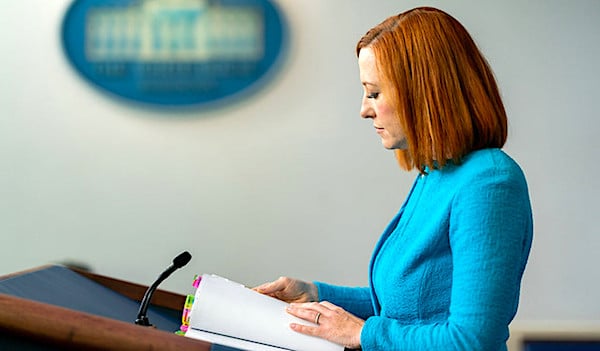 And she's not going to get into discussing them.

Her position has flipped since not that many months ago when she demanded access to the private phone calls of President Trump.

"'What changed?' Jen Paski no longer a fan of discussing leaked transcripts of a president's phone calls," wondered a Twitchy commentary.

The importance of phone calls grew when, this week, Reuters obtained a leaked transcript and audio copy of a call between Joe Biden and Afghan President Ghani, "during which Biden asked Ghani to proclaim publicly that the fight against the Taliban was going well 'whether it is true or not.'"

The stunning advocacy for lying was clear. Biden said, "I need not tell you the perception around the world and in parts of Afghanistan, I believe, is that things are not going well in terms of the fight against the Taliban. And there is a need, whether it is true or not, there is a need to project a different picture."

Asked about the issue at a news conference, Psaki said, "I am not going to go into the details of a private conversation…"

She had been asked bluntly: "Was the president in any way pushing a false narrative in that call?"

REPORTER: "Was the president in any way pushing a false narrative in that call?"

PSAKI: "I am not going to go into the details of a private conversation..." pic.twitter.com/4lJPX6QXT6

But Twitchy noted multiple commenters immediately raised the issue of Psaki's demand for access to President Trump's phone calls, when the Democrats were using them as fodder for one of their failed impeach-and-remove campaigns.

Psaki's demand, back in 2019, was for the call transcript, a whistleblower complaint, and more.

Fox News pointed out how Psaki's statement about Trump "comes back to haunt her."

"An old tweet from White House Press Secretary Jen Psaki is coming back to haunt her amid reports of the controversial July phone call between President Joe Biden and then-Afghan President Ashraf Ghani as the administration pursued the military withdrawal from Afghanistan," Fox News said.

"According to a transcript of the July 23 presidential call reviewed by Reuters, Biden didn’t anticipate the Taliban’s rapid advance across Afghanistan, which ended when its fighters stormed Kabul on Aug. 15 and Ghani fled the presidential palace. Instead, Biden focused much of the 14-minute call on the Afghan government’s 'perception' problem, Reuters reported."

Trump's telephone call was with Ukraine's Volodymyr Zelensky about suspicions that Hunter Biden, and possibly Joe Biden, had been involved in misbehavior there.

That was where Hunter Biden was paid millions of dollars by Ukraine gas company Burisma to be on its board, even though he had no experience in the industry. But his father, then vice president, was in charge of Ukraine policy for Barack Obama.

Joe Biden then openly boasted of threatening to withhold $1 billion in U.S. aid if Ukraine's president did not fire the country's top prosecutor, Victor Shokin, who at the time was investigating Burisma for corruption.

Reuters reviewed a transcript and a recording of the conversation between Biden and Ghani. Those were obtained from an unidentified source who was not authorized to release the details.

In the telephone call late in July, Biden lamented the "perception" problem about Afghanistan, where he had announced the American military would withdraw, and the Taliban terrorists were advancing, taking control of regional cities one after another.

"I need not tell you the perception around the world and in parts of Afghanistan, I believe, is that things are not going well in terms of the fight against the Taliban," Biden charged. "And there is a need, whether it is true or not, there is a need to project a different picture."

The revelation triggered headlines such as the one at Populist.Press which stated, "Bombshell: Biden knew, phone call leaked! Impeach him now."

Reuters explained the advocacy to mislead came in the last call between Biden and Ghani before the Taliban took control.

That was on July 23. On August 15, Ghani fled the country and relinquished the nation to the Taliban.

Since then, tens of thousands of people, including Americans, have tried to flee, and a terror attack killed 13 U.S. troops.