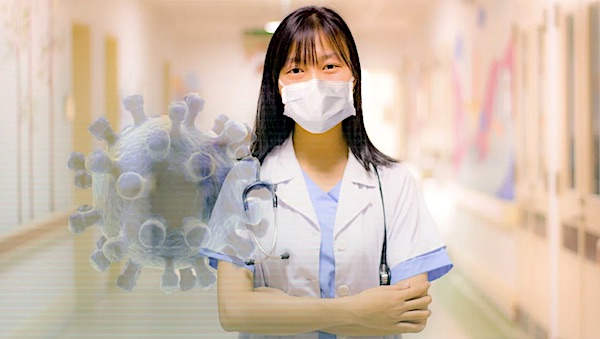 A plethora of politicians and government officials across the globe screwed up in their handling of the COVID-19 Pandemic. The Chinese government, however, was acutely damaging with its ineptitude, because it, more than any other entity, had a chance to limit the spread of the SARS-CoV-2 coronavirus when it first emerged in late 2019. Instead of trying to contain the virus with the help of the international community, however, the Chinese government lied, misled, and stalled. All of humanity has experienced the disastrous result of this negligence.

In his new book, Uncontrolled Spread, physician, senior fellow at the American Enterprise Institute, and former FDA commissioner Scott Gottlieb focused his considerable expertise on pointing out the ways in which the world's response to COVID-19 fell short, and how we can better prepare for the next inevitable pandemic. Early on in the book, he chronicled numerous examples of the Chinese government's inept, corrupt handling of what was then an emerging outbreak. Here are ten of them:

1. Silencing Genetic Sequencing. In late December 2019, doctors around Wuhan started noticing people coming in with a strange pneumonia, and began sending patient samples to genomics companies for sequencing. The reports they received back were disturbing – it was a never-before-seen, SARS-like coronavirus. By January 1, provincial health officials instructed these companies to stop testing samples from the Wuhan outbreak and to destroy their remaining specimens. Two days later, China's top health authority ordered genomics labs not to publish any data related to the novel coronavirus.

2. Censoring Doctors. Early on in the pandemic, Wuhan's local doctors quickly realized that a novel virus was spreading, and took to social media platforms like WeChat and Weibo to share information with each other. They were soon censored by the Chinese government, and posts related to what was then dubbed "Wuhan SARS' were suppressed. Many doctors were detained, interrogated, and threatened with prosecution. "Chinese scientists and physicians took risks, and their efforts saved lives," Gottlieb wrote.

3. Deploying Social Media Bots. According to ProPublica, more than ten thousand Chinese government-linked accounts on Twitter were used to cast doubt on early reports related to the outbreak in Wuhan.

4. Censoring Social Media. Citizen Lab documented thousands of keywords related to COVID that were suppressed by the Chinese government on platforms YY and WeChat. Many deleted posts criticized the government for their handling of the outbreak.

5. Not Reporting the Outbreak to the WHO as Required. As a signatory to major public health treaties, the Chinese government was required to notify the world community of any unusual, novel pathogen within its borders that could spread internationally, typically within 72 hours of detection. The novel coronavirus clearly met this description, yet Chinese officials withheld information about the virus for weeks.

6. Refusing to Share the Coronavirus' Genetic Sequence. When the genetic sequence of the coronavirus was first shared widely in early January, it was a heroic, rogue Chinese researcher, not the government, who did so. Dr. Zhang Yongzhen was directed not to release the information, but frustrated with what he perceived as irresponsibility by government officials, he defied their order. Within hours, Zhang's lab was shut down by the Shanghai Municipal Health Commission for "rectification".

7. Not Sharing Virus Samples. Very early on, global researchers were clamoring for Chinese officials to share samples of the novel coronavirus so they could evaluate it and begin developing diagnostic tests, vaccines, and therapeutics. Government officials never did. "Access to those samples at the outset could have helped the world prepare," Gottlieb wrote. "And without the source strains, it would be impossible to determine with any certainty the virus's origin."

8. Attempting to Avoid Travel Restrictions. In early February, as it started to become clear that China was losing control of the outbreak, the government was still privately clashing with the WHO to block the declaration of a Public Health Emergency of International Concern (PHEIC). Government officials wanted to avoid burdensome travel restrictions which the PHEIC would likely lead to.

9. Misleading the World Health Organization. In the early days of the pandemic, the WHO publicly stated that it was in constant contact with Chinese government officials. This was true, but the dialogue was essentially useless. "The WHO would submit long lists of questions to Chinese officials, related to the scope and severity of the epidemic. In return, the Chinese government would provide achingly incomplete replies," Gottlieb wrote. Little of value was relayed.

10. Refusing to Allow CDC Scientists Into Wuhan. Roughly a dozen CDC staff are permanently stationed in Beijing. On January 1, 2020, CDC Director Robert Redfield emailed Dr. George Fu Gao, the director of China's CDC, requesting that these U.S. researchers be granted access to the outbreak hot zone to assist in identification of the novel pathogen. Gao refused, and would do so again when Redfield pressed the matter. At the time, Chinese officials were still saying publicly there was no evidence of person-to-person spread. Redfield believes that U.S. scientists would have quickly discovered that the coronavirus was spreading human-to-human, and doing so asymptomatically.

As Gottlieb wrote in Uncontrolled Spread, "The spark of transmission was lit amid the suppression and distortion of key facts... Had the Chinese government been more forthright at the outset, there was a chance that the virus could have been contained."