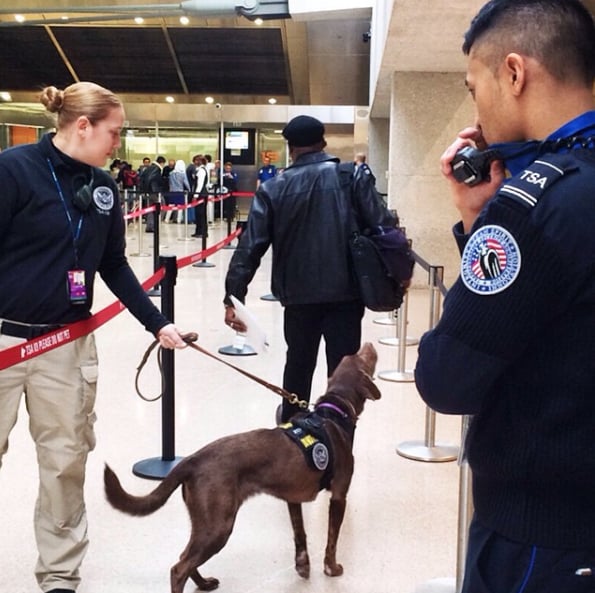 President Biden's announced vaccine mandate for private employers is being blamed for flight disruptions, and now his mandate for federal workers is posing the threat of further travel chaos with the TSA admitting that 40% of its agents remain unvaccinated six weeks before the deadline.

"We have about 60 percent of our workforce has been vaccinated, that that number needs to go quite a bit higher over the next few weeks," Transportation Security Administration Administrator David Pekoske told CNN.

The Nov. 22 deadline is only two days prior to the Wednesday before Thanksgiving, which usually is the nation's busiest travel day of the year.

"We are building contingency plans, for if we do have some staffing shortages as a result of this, but I hope to avoid that," Pekoske said.

Meanwhile, the Sheet Metal, Air, Rail and Transportation Union, known as SMART, announced on behalf of its 203,000 members that it is standing against forced vaccination.

On Wednesday, the Navy said all active-duty personnel must be vaccinated by Nov. 28 or face separation. Navy personnel can request an exemption for medical or religious reasons, but a previous infection or a positive serology test will not exempt a service member.

The Marine Corps also has a Nov. 28 deadline. The Air Force's deadline is Nov. 2 and the Army's is Dec. 15. Biden has ordered the 2.1 million service members to get vaccinated against COVID or face punishment.

In Washington state, where Democratic Gov. Jay Inslee has imposed an Oct. 18 deadline for state workers, Washington State Department of Transportation workers hung up their vests on fences in protest on Friday.

Washington State Department of Transportation workers hang up their vests, @GovInslee is firing them on October 18 for not complying with the vaccine mandate. pic.twitter.com/L4nRSuFP5D

Amid record-high homicide rates, the Seattle Police Department, which already has lost 200 officers due to defunding, is bracing for the loss of another 200 or more due to Mayor Jenny Durkan's mandate, which goes into effect Monday.

Hospitals across the state could lose 70,000 staffers due to Inslee's order. The Washington Post reported Friday that nurses across the nation say they are "emotionally, physically, mentally tired" and morale has hit a pandemic low.

The Seattle Times reported about 20 firefighters for the city of Redmond, Washington, the home of Microsoft, say they aren't vaccinated and have no plans to do so.

In Italy, unions condemned a new law requiring vaccine passports for virtually all workers nationwide. The country has 3.8 million unvaccinated workers, many in strategic sectors and public services such as ports, trucking health care and law enforcement, Politico reported.

"With a combination of absentees, strikes and protests planned to block motorways and shut down ports, unions are warning of shortages of raw materials, fuel and food, and likely disruption to essential public services such as garbage collection," Politico said.

The Italian unions have condemned vaccine passports. Italian dockers have stated that most of Italy's ports will be halted if vaccine passports are made obligatory for all workplaces.#SiamoTuttiPortuali ♥️🇮🇹#NoVaccinePassports pic.twitter.com/1eOolpD2pP

Tens of thousands in cities across Italy protested the vaccine passports on Friday, including in Bologna.

Tens of thousands are protesting in cities all across Italy today after a vaccine pass requirement for nearly all forms of employment officially took effect. This footage is from Bologna.pic.twitter.com/TnweO4r6AE

However, new data from the United Kingdom indicate vaccine mandates and passports are useless in stopping infection.

In fact, infection rates among the fully vaccinated are higher than those of the unvaccinated in all age cohorts over 30.

Oct 14, 2021: UK CoV2 infection rates among the fully vaxxed are higher than those of the unvaxxed in all age cohorts ≥30. ➡️ Both vaxxed & unvaxxed of all ages get infected & spread - and in most age groups, the vaxxed moreso - which renders vaxx passports & mandates useless. pic.twitter.com/O7OSVDEPrw

A study by Harvard researchers across 68 countries and 2,947 counties in the United States found "no discernable relationship between percentage of population fully vaccinated and new COVID-19 cases."  The researchers said countries with a higher percentage of the population fully vaccinated have a higher number of COVID-19 cases per 1 million people.