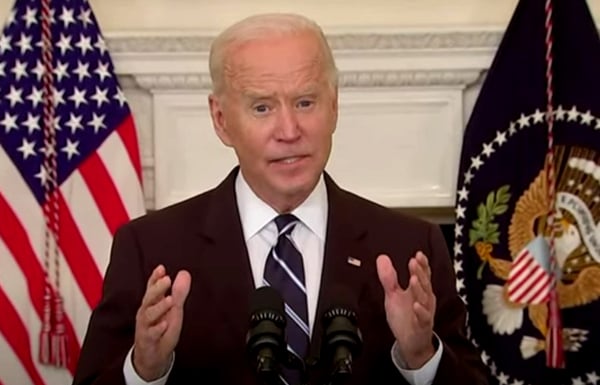 President Biden announces a vaccine mandate for private companies in an address to the nation Sept. 9, 2021 (Video screenshot)

Was President Biden's announcement Sept. 9 of a vaccine mandate for private companies employing 100 or more people a bluff to persuade more Americans to be vaccinated?

One month later, pointed out The Federalists' Joy Pullman, no rule has been issued by the Department of Labor's Occupational Safety and Health Administration, known as OSHA.

The nearly two dozen Republican attorneys general who have threatened to sue on constitutional grounds have not yet filed, because there is no mandate for them to bring to court.

That may be part of the plan, wrote Pullman, The Federalist's executive editor.

The Biden administration, she said, is imposing the public perception of a mandate by following an unusual rule-making process called an emergency temporary standard, or ETS.

But even through the emergency process, OSHA says it takes up to six months for a rule to go into effect after it is issued in the Federal Register. And that hasn't happened yet. Meanwhile, companies are telling reporters their vaccine mandates will have, at the latest, December deadlines.

Pullman observed that "using the ETS procedure instead of normal federal rule-making processes both allows the Biden administration to push its demands faster and without any public input or requirement of responding to public input, which is normally required of even legally laughable federal rule-making like this one would be."

"That is part of why ETS rules have been overwhelmingly overturned in courts," she wrote.

Is the Biden administration actually interested in saving the lives of Americans?
1% (12 Votes)
99% (1414 Votes)

OSHA has used that legal authority only 10 times in 50 years, wrote David Rivkin Jr. and Robert Alt in the Wall Street Journal in September. Courts have ruled on challenges to six of those standards, rejecting five and upholding only one.

Rivkin and Alt believe Biden's mandate is unconstitutional, arguing the states, not Congress, have plenary police power to regulate health and safety. Congress, they wrote, has no authority to fine an individual who declines to be vaccinated, "much less to prevent him from earning a livelihood."

The Democrats' $3.5 trillion "infrastructure" bill includes increased fines on employers that could run as high as $700,000 for willful or repeated violations of Biden's vaccine mandate.

White House 'well-served' by 'nonexistent mandate'
In a letter to the Wall Street Journal published this week, Bruce Atkinson observed that "the mandate's nonexistence shields the Biden administration from legal challenges that may ultimately restrict the Occupational Safety and Health Administration’s authority."

Further, the "nonexistent mandate also allows so-inclined state and local governments and companies to issue their own mandates, seemingly in lockstep with Washington."

Pullman concluded the Biden White House "has been well-served by presenting a nonexistent mandate as a done deal."

She said Biden's "government by press release" allows "weak Republicans and evil Democrats to shadowbox each other for the cameras while ordinary Americans suffer under their abdicated leadership."

"By the time Republican attorneys general get around to filing lawsuits over any eventually issued legal documents that fulfill Biden's promises," Pullman wrote, "the vast majority of people not wanting government to force them into medical procedures will likely be unemployed, forcibly injected with treatments that have almost no track record, forced from their education paths, provided with fake documents like these citizens are beneath COVID-rule-exempt illegal aliens, and all the rest."