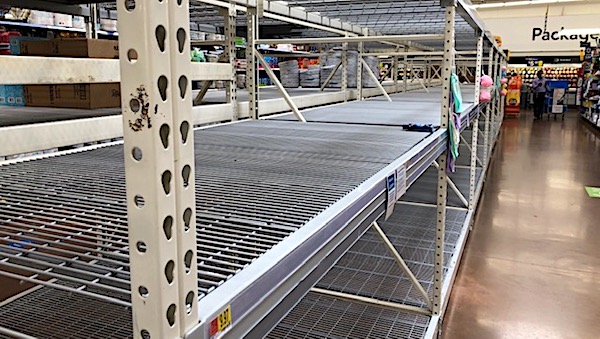 A shortage of just about everything is looming ahead of the holiday season as hundreds of ships wait outside ports and rail yards clog up due amid a lack of workers and truckers.

President Biden assured Americans on Aug. 11 that "these bottlenecks and price spikes will reduce as our economy continues to heal," appointing a "port envoy" who would work with Transportation Secretary Pete Buttigieg.

Biden said at the time that his administration was "bringing together the port operators, shipping lines, the labor unions, trucking companies, railroads, and others to speed up the port's operations."

But the Washington Post, which endorsed Biden in 2020, reported in an in-depth feature the "commercial pipeline that each year brings $1 trillion worth of toys, clothing, electronics and furniture from Asia to the United States is clogged and no one knows how to unclog it."

"This will impact every American, especially those who can least afford it," he wrote on Twitter. "It's past time for President Biden and Pete Buttigieg to explain what they're doing about this."

Cotton said Biden chose Buttigieg as Transportation secretary even though he was "completely unqualified," and now the former South Bend, Indiana, mayor "is absent during a transportation crisis that is hurting working-class Americans."

Buttigieg has said in recent interviews that "it's an incredibly complicated situation," but the government is holding virtual "roundtables" with port operators, labor unions and private companies. Nevertheless, he told MSNBC last Thursday, the "challenges" will continue, not only "going into the next year or two, but going into the long term."

The Wall Street Journal reported Walmart, Costco and Target are chartering their own cargo ships to import goods, paying about $100,000 day, or four times more than last year.

The transporting of goods from Asia to North America is currently taking about 80 days, which is twice as long as before the COVID-19 pandemic.

At the Port of Savannah in Georgia, nearly 80,000 containers are stacked up on the docks, which is 50% more than normal, the New York Times reported. And some ships have waited for nine days before getting a slot.

Many didn't come back to their jobs
Georgia Port Authority director Griff Lynch said Sunday in an interview with Trey Gowdy on Fox News "Sunday Night in America" said the problem began a year and a half ago when foreign ports shut down because of COVID.

Buttigieg believes the Democrats' $3.5 billion infrastructure plan would help address the crisis, but Lynch said the problem stems more from a lack of workers than a lack of resources.

"Clearly what's transpired is after the shutdown, the question is did everyone come back to their jobs? Did the truckers come back? Did the warehouse folks come back? And the answer is no they haven’t. So that is certainly contributing to what we’re seeing here," Lynch said.

Lynch pointed out that ports are now dealing with double the amount of backlogged containers.

"We've literally gone from 300 miles of containers last summer to 600 miles. That's a big deal, and it's creating congestion. We need to find ways to move the cargo," Lynch said.

"Consumers are confronting higher prices and shortages of cars, children’s shoes and exercise gear, as the holiday shopping season looms," the Post said.

The paper quoted Brian Bourke, chief growth officer at SEKO Logistics, warning the problem is "going to get worse again before it gets better."

"Global supply chains are not built for this. Everything is breaking down," he said.

Meanwhile, Jamie Dimon, the billionaire CEO of JPMorgan Chase, struck an optimistic tone on Monday at a conference hosted by the Institute of International Finance.

"I should never do this, but I'll make a forecast," Dimon said. "This will not be an issue next year at all. This is the worst part of it. I think great market systems will adjust for it like companies have."