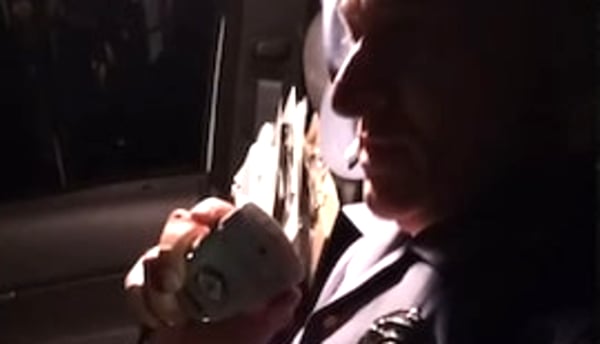 Signing off for the last time after 22 years with the Washington State Patrol, a trooper who refused to comply with Gov. Jay Inslee's vaccine mandate had a few parting words for the Democratic leader: "Kiss my ***."

As the deadline for getting vaccinated passed Monday and the state patrol braced for the loss of as many as 100 troopers, Robert LaMay of Yakima County in central Washington videoed his final call on the radio, thanking his colleagues for their work and support, reported Jason Rantz of KTTH Radio in Seattle.

Only three years from full retirement, LeMay, a Christian with religious objections to the vaccine, said Friday night it's about religious liberties and freedom.

"This is my final sign-off. After 22 years of serving the citizens of the state of Washington, I'm being asked to leave because I am dirty," LaMay announced, referring to his unvaccinated status. "Numerous fatalities, injuries, I've worked sick, I’ve played sick. We’ve buried lots of friends over these years. I’d like to thank you guys. I’d like to thank the citizens of Yakima County as well as my fellow officers within the valley. Without you guys, I wouldn’t have been very successful. And you kept me safe and got me to my family every night. Thank you for that."

LaMay, a married father of four, became visibly emotional as he continued.

Inslee's mandate, believed to be among the strictest in the nation, applies to some 800,000 state workers, long-term care employees, and teachers and staff at the state's schools. The only opt-out is a medical or religious exemption. But the exemptions are allowed only if a job accommodation can be made that removes the worker from contact with the public.

Amid record-high homicide rates, the Seattle Police Department, which already has lost 200 officers due to defunding, is bracing for the loss of another 200 or more due to Mayor Jenny Durkan's mandate, which also goes into effect Monday. Hospitals across the state could lose 70,000 staffers due to Inslee's order.  The Seattle Times reported about 20 firefighters for the city of Redmond, Washington, the home of Microsoft, say they aren't vaccinated and have no plans to do so.

An estimated 50% of Chicago police officers and the same percentage of Houston firefighters have refused to be vaccinated. The city of Chicago issued a statement Sunday night threatening to remove the retirement benefits of officers who choose to retire rather than submit to Democratic Mayor Lori Lightfoot's mandate.

The Transportation Security Administration has admitted that 40% of its agents remain unvaccinated six weeks before the federal deadline.

In Massachusetts, 1,571 state employees who have not proven they have been vaccinated against COVID-19 or sought an exemption now face being suspended and potentially fired under Republican Gov. Charlie Baker's inoculation mandate, the Boston Globe reported. A union official said a handful of his members had been suspended by midday Monday.

'You've been a great role model and mentor'
After his last call, LaMay received praise from employees at the communications center who recalled his service, including delivered a baby while on patrol in Bremerton during his first year. Among his awards are the Red Cross Real Life Hero award, WSP Commission Award (twice), WSP Commercial Vehicle Division Trooper of year in 2007, 2008 and 2009, and the Washington Traffic Safety Commission certificate of appreciation for seat belt enforcement.

"You've been a great role model and mentor for all young troopers serving in the area by sharing your knowledge and experience throughout the years. Thank you for your service," the dispatch operator said.

“This is the last time you’ll hear me in a patrol car and Jay Inslee can kiss my ass.”

Washington State Trooper in Yakima, Wash. signs off after 22 years — fired by @GovInslee for being unvaccinated. pic.twitter.com/RGLDs5BZxg

Another Washington State Patrol veteran, Sgt. Richard Thompson, tearfully signed off after 17 years of service, explaining he was taking a "moral stand for medical freedom and personal choice."

His wife, a dispatcher, also has been forced out because of the governor's mandate.

Taking a "moral stance for medical freedom & personal choice," this 17-year veteran of the WA State Patrol tearfully says goodbye, forced out by @GovInslee's vaccine mandate. His wife is the dispatch operator (15-year veteran) & is also out.

Both will be on my radio show today. pic.twitter.com/MOymXE8bYh

On Twitter, a user commented on Thompson's remarks, saying that as a "front line worker, if he can't protect his fellow citizens by getting vaccinated for COVID, he does not belong in law enforcement."

Another said the officer swore an oath to protect and serve, and was well paid to accept the risks associated with his job.

Rantz replied: "But [the vaccine] doesn't protect the people he works with. It only offers protection to himself."

LaMay said in an interview Monday with Fox News that "over the last month it’s been nothing but just beating up our fellow employees, constantly telling them they have to vax."

"We worked eighteen months without having any type of issues. And now suddenly we have to have these mandatory vaccines," he said. "So that's, not taking the vaccine was not even a question. The process, how they did it was ridiculous and making people do this or you’re losing your job was ridiculous."