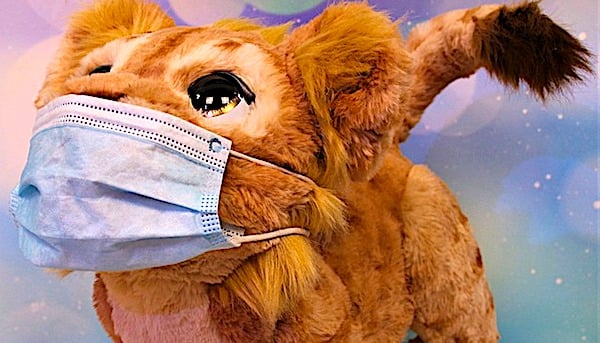 Centers for Disease Control and Prevention Director Dr. Rochelle Walensky said during a White House briefing Wednesday her agency will recommend masks for school children even after vaccines are administered for children ages 5-11.

"As we head into these winter months, we cannot be complacent,” Walensky said. "We know from previous data that schools that have had masks in place were 3.5 times less likely to have school outbreaks requiring school closure. So right now we are going to continue to recommend masks in all schools for all people in those schools and we will look forward to scaling up pediatric vaccination during this period."

During the briefing Wednesday, the White House said it has secured enough supply to vaccinate the 28 million children who would become eligible pending FDA authorization. The administration also will assist more than 25,000 pediatric and primary care offices, hundreds of community health centers and rural health clinics, and tens of thousands of pharmacies to administer the shots.

"We know millions of parents have been waiting for COVID-19 vaccine for kids in this age group. And should the FDA and CDC authorize the vaccine, we will be ready to get shots in arms," said White House COVID-19 response director Jeff Zients at the briefing.

In early August, Walensky said in a CNN interview that the vaccines were not preventing transmission of the virus. She said vaccinated people should still wear masks indoors, because while the vaccines are working "exceptionally well" at keeping people from experiencing severe illness and death from COVID-19, "what they can't do anymore is prevent transmission."

Is the government actually looking to harm rather than help America's children?
96% (48 Votes)
4% (2 Votes)

CDC statistics show children generally do not spread COVID-19 and have little risk of any adverse effects. The seasonal flu is more deadly among children than COVID-19, and the swine flu one decade ago was six times more deadly. The survival rate for children under age 20 who get COVID, according to the CDC, is 99.998%.

Earlier this week, citing concerns of an increased risk of heart inflammation, the FDA delayed its decision on administration of the Moderna vaccine to young people. The agency is planning to review the data regarding myocarditis further before making a decision.

Already, as WND reported, Sweden, Finland and Norway have halted the Moderna COVID-19 vaccine for younger people, and Iceland has stopped administering the shot to everyone.

'The data do not support' mask mandates
At a news conference Wednesday, Florida's new surgeon general, Dr. Joseph Ladapo, urged citizens to "step back for a moment from you hear constantly on TV" from public health officials.

He said "the data do not support any clinical benefit for children in schools with mask mandates."

Parents should be the ones to decide whether or not to put a mask on their children, Ladapo said, adding that they are "being placed in impossible situations related to the health of their children."

"[Masking] was required in every school," the governor noted. "So they just said it worked without comparing it against what if you didn't do that."

Cardona, in a Twitter thread one month ago, also cited a Wisconsin study. But the researcher who led the study countered the education secretary, saying he found no conclusive evidence on forced masking.

Florida's per capita coronavirus case average is lower than all but two states, according to the New York Times tracker.

See the remarks by Ladapo and DeSantis:

Florida's New Surgeon General Asks People To Step Away From What You Hear On TV For A Moment...

And Listen To What He Has To Say About School Mask Mandates & The Data... pic.twitter.com/5kngX0UQft

More harm than good
The most recent CDC guidelines recommend mask use for anyone 2 years or older in public settings and when around people who don’t live in their household.​ However, in March 2020, the CDC said masks "are usually not recommended" in "non-health care settings."

The same month, the World Health Organization recommended people not wear face masks unless they are sick with COVID-19 or caring for someone who is sick. Dr. Mike Ryan, executive director of the WHO health emergencies program, said in March 2020 that there "is no specific evidence to suggest that the wearing of masks by the mass population has any potential benefit.

Similarly, in a March 2020 interview with "60 Minutes," White House coronavirus adviser Dr. Anthony Fauci warned of "unintended consequences," saying there's "no reason to be walking around with a mask" in "the middle of an outbreak." Fauci now says that whether students "are vaccinated or not, they need to wear a mask."

Fauci and others argue the science has evolved. However, a study earlier this year by the University of Louisville was among many that found that state mask mandates did not help slow the spread of COVID-19. A CDC study in October 2020 indicated that Americans were adhering to mask mandates, but the requirements didn't appear to have slowed or stopped the spread of the coronavirus. And further, it found, mask-wearing has negative effects. The Association of American Physicians and Surgeons has compiled a page of "Mask Facts" showing that the consensus prior to the coronavirus pandemic was that the effectiveness of mask-wearing by the general public in slowing the spread of a virus is unproven, and there's evidence it does more harm than good.

'The science of masking kids'
In September, an article in the left-leaning magazine The Atlantic presenting evidence that school children should not be required to wear a mask prompted Twitter users to flag it for misinformation and call for a retraction.

In "The Downsides of Masking Young Students Are Real," Vinay Prasad, a hematologist and oncologist and associate professor of epidemiology and biostatistics at UC San Francisco, concluded that the "potential educational harms of mandatory-masking policies are much more firmly established, at least at this point, than their possible benefits in stopping the spread of COVID-19 in schools."

A similar story published by New York magazine was titled "The Science of Masking Kids at School Remains Uncertain."

Author David Zweig cited a large-scale study published by the Centers for Disease Control and Prevention that found no statistically significant difference in schools that required students to wear masks compared to schools where masks were optional.

Advocates of vaccinating and masking children who acknowledge the COVID-19 survival rate for children is virtually zero, point to concern about "long COVID," adverse effects that linger months after an infection.

However, BBC News reported, the world's largest study on the risk of "long COVID" in children, published in September, found it is much lower than many had feared. The researchers, led by University College London, said they were "reassured" after they surveyed 11- to 17-year-olds testing positive for coronavirus in England between September and March.

Art Moore
Art Moore, co-author of the best-selling book "See Something, Say Nothing," entered the media world as a PR assistant for the Seattle Mariners and a correspondent covering pro and college sports for Associated Press Radio. He reported for a Chicago-area daily newspaper and was senior news writer for Christianity Today magazine and an editor for Worldwide Newsroom before joining WND shortly after 9/11. He earned a master's degree in communications from Wheaton College.
@@arthurdmoore
40,000 unvaccinated National Guard members set to be fired!
Supreme Court quashes Biden's climate-change agenda
Biden calls for removing Senate filibuster to codify Roe
Disney kids' show character: Men have periods, too
Retail chain that dumped MyPillow takes uncool action as sales plunge
See more...