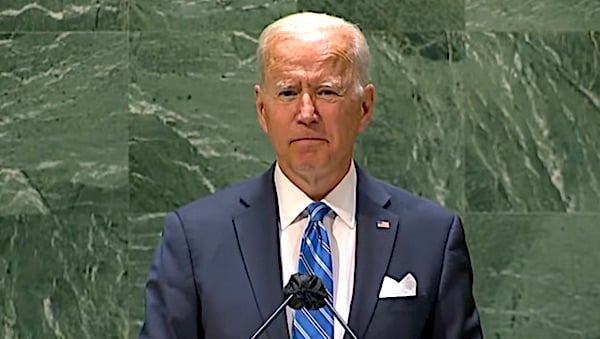 American voters by a massive majority are rejecting "Biden's runaway spending spree," his plans for a $3.5 trillion spending program to hand out piles of cash to social, green and leftist agenda points, according to a new poll from Convention of the States Action, in partnership with The Trafalgar Group.

It reveals that more than 70% of respondents are less likely to support the spending program if they knew it increases taxes and the national debt.

The results are from interviews with 1,000 likely 2022 election voters.

"Independents and Republicans oppose this bill by huge majorities, as do fully half of Democrats. Almost nobody supports Biden’s runaway spending spree, and folks are outraged that – with everything else they’ve had to endure with this failed presidency – increasing taxes and adding to our astronomical debt are actually on the table," said Mark Meckler, president of Convention of States Action. "The hard left can continue to make noise, but our elected officials know where the public stands on this monstrosity. This proposal is not happening."

Biden, in fact, has been unable to muster the support even among members of his own party to get the plan through Congress, even though House Speaker Nancy Pelosi has promised it over and over.

The poll shows 71.5% of Americans say they are less likely to support President Biden’s proposed $3.5 trillion budget bill if they know it increases taxes and grows the national debt.

Biden's problem is that among Democrats, 50.2% are less likely to support his spending spree, and among Republicans it's a hands-down 92% who say their support is less likely.

The question was: "Would you be more or less likely to support President Biden's proposed $3.5 trillion budget bill if you knew it increases taxes and the national debt."

Biden and some Democrats promoting the idea repeatedly have claimed the program costs nothing, because it's all paid for with new taxes. But analysts have scoffed at the claim, because even with trillions in new taxes, the bill counts on developments like massive increases in the economy to generate enough income.

Some 73.7% of independents say they are less likely to support President Biden’s proposed $3.5 trillion budget bill if they know it increases taxes and grows the national debt. 21.7 percent say they are more likely.