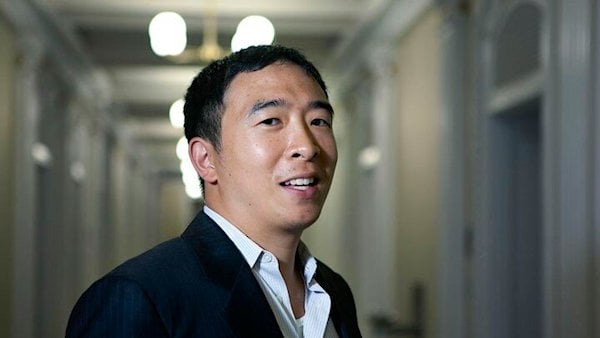 Andrew Yang, whose candidacy for the Democratic Party nomination for president in 2020 left him far back in the race, said last month he was leaving the Democrat Party to start a new political group.

Yang said on a blog post Monday that he believes "no longer being a Democrat is the right thing" and now, "I can be even more honest."

It's just another pinprick in the façade held up by House Speaker Nancy Pelosi and President Joe Biden that the Democrats are a unified group – the message they gave to the country during the 2020 election.

In fact, far-left extremists in the party have exerted such influence that the entire party now is moving well inside the boundaries of socialism and Marxism. America was told in the last presidential election that Joe Biden was the "moderate" who would be acceptable when other extremists like Bernie Sanders were not.

But Fox News reported even Biden has moved to the fringe, blasting moderate Sens. Krysten Sinema and Joe Manchin for not supporting what he wanted.

In fact, Democrats, with majorities in the House and the Senate and with Biden in the White House, have been unable to agree among themselves on their election takeover plan, their infrastructure plan, their massive $3.5 trillion spending plan and many, many more less impactful items.

"I hear all the folks on TV saying why doesn't Biden get this done?" Biden said recently.

"Well, because Biden only has a majority of effectively four votes in the House and a tie in the Senate, with two members of the Senate who vote more with my Republican friends," he said, rebuking Sinema and Manchin publicly.

They both vote with the president almost all the time, but they oppose his plan to destroy the 60-vote filibuster in the Senate.

Yang actually is known largely for his failed presidential bid, his failed bid to be mayor of New York and his advocacy for guaranteed income for Americans.

Yang said he still has many friends in the party, even though his registration was changed to "independent," which came about be cause thinks "our system is stuck. It is stuck in part because polarization is getting worse than ever. Many of the people I know are doing all of the good they can – but their impact is constrained. Now that I’m not a member of one party or another, I feel like I can be even more honest about both the system and the people in it."

He admitted there always was "something of an odd fit" between him and the party.

"Making partisan arguments – particularly expressing what I often see as performative sentiment – is sometimes uncomfortable for me. I often think, 'Okay, what can we actually do to solve the problem? I’m pretty sure there are others who feel the same way I do.

"Breaking up with the Democratic Party feels like the right thing to do because I believe I can have a greater impact this way," he wrote.