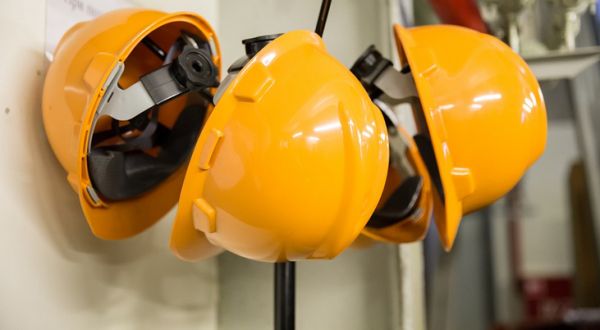 President Joe Biden is using what one court opinion called “the most dramatic weapon in OSHA’s enforcement arsenal” to back up his COVID-19 vaccine mandate for employers with 100 or more workers.

But relying on this bureaucratic weapon could be a risky strategy in the face of litigation threats, since courts have struck down all or part of the Occupational Safety and Health Administration’s emergency regulations in four of the six legal challenges so far.

Biden mentioned OSHA’s role Thursday in a speech promoting the need for Americans to get COVID-19 vaccinations during a trip to Elk Grove Village, Illinois, near Chicago.

“The unvaccinated also put our economy at risk because people are reluctant to go out,” the president said.

Biden said the Labor Department, which includes the Occupational Safety and Health Administration, would “shortly issue an emergency rule” to enforce the vaccine mandate for Americans whose employers have more than 99 full-time workers on the payroll.

The president, who asked for the OSHA regulation Sept. 9, said Thursday that a previous mandate imposed on federal employees had a big impact.

The president also said that vaccine mandates already imposed by public and private sector employers, including colleges and universities, spurred a dramatic increase in COVID-19 vaccinations.

Before OSHA issued an emergency COVID-19 regulation for health care workers in June, the agency’s last such emergency regulation was struck down in court in 1984.

Under the 1970 statute creating the Occupational Safety and Health Administration, the agency must promulgate a long-term rule within six months to supersede any emergency temporary standard.

Congress passed and President Richard Nixon signed the Occupational Safety and Health Act, which established OSHA as part of the Labor Department to regulate safety in workplaces.

The law specifically allows OSHA to impose immediately an emergency, temporary standard—which bureaucrats call an ETS—in a process that bypasses the sometimes lengthy procedures and reviews in rulemaking.

However, the law also places three conditions on the agency’s capacity to impose such a regulation, according to a recent study by the Congressional Research Service, which produces reports for Congress.

The first condition is that employees are being exposed to “grave danger.” The second is that an emergency standard from the government is necessary to protect employees from such danger. The third is that the rule is feasible for employers to implement.

Under the Administrative Procedure Act, an executive branch agency must allow 30 days for public comment after placing a proposed regulation in the Federal Register. Objectors to the regulation may call for a public hearing.

Spokespersons for OSHA and the Labor Department did not respond to The Daily Signal’s requests for comment for this report.

‘Vulnerable in the Courts’

In 1983, OSHA issued an emergency temporary standard lowering the permissible exposure limit to asbestos. The agency claimed that 80 workers would die from exposure to the substance over six months if the rule wasn’t in place.

The 5th U.S. Circuit Court of Appeals did not buy the government’s argument, however. In the case of Asbestos Information Association v. OSHA, the federal appeals court invalidated OSHA’s emergency temporary standard, partially on the grounds that the agency did not provide sufficient support for its claim.

“In terms of using this emergency process with no comment, it has been used for benzine and asbestos. I believe in both of those cases, they were not able to sustain the rule,” Scalia said Sept. 13.

These emergency standards in the past, when they’ve been adopted by the Labor Department, have proved to be very vulnerable in the courts, which I think is part of the reason you’re hearing the criticisms now. Workers and businesses have a lot of questions about how this is going to be implemented, what the exact requirements are going to be, and it would be better if the Labor Department would give people a chance to provide their input.

In the 1984 asbestos case, the 5th Circuit determined that OSHA would have fallen short of proving the necessity for the emergency standard, largely because it duplicated the agency’s existing requirements on respirators.

The appeals court ruled that “fear of a successful judicial challenge to enforcement of OSHA’s permanent standard regarding respirator use hardly justifies resort to the most dramatic weapon in OSHA’s enforcement arsenal.”

On average, OSHA regulations take 39 months to be fully implemented, according to a 2012 Government Accountability Office sampling of 59 rules.

If the goal is to push an executive branch mandate for COVID-19 vaccines in many workplaces, it’s understandable why the Biden administration chose this route. But for the vaccine mandate to hold up in court, the administration must meet the burden of proof, based on the law’s requirements.

The meaning of  “grave danger” to employees is not defined either in statute or regulation, according to the Congressional Research Service. The lack of a definition opens the way for the courts to decide on a case-by-case basis.

Even if the federal government can prove a “grave danger” to employees, it must prove the necessity of bypassing the regular rulemaking procedures.

OSHA put nine emergency regulations in place between 1971 and 1983. Most dealt with workplace hazards such as asbestos, carcinogens, and chemical exposure, according to the Congressional Research Service. A 1976 rule governing “diving operations” was the subject of a lawsuit by a company that works in deep-water ports.

In all, courts vacated four of OSHA’s emergency standards and halted enforcement of two, in 1976 and 1977.

What the Law Allows

Congress did not grant the Occupational Safety and Health Administration the authority to mandate vaccines, according to a pending report by two Heritage Foundation researchers—Doug Badger, senior fellow for domestic policy studies, and Paul Larkin, a senior legal research fellow. (Heritage is the parent organization of The Daily Signal.)

“If you look at the statute itself, it talks about toxic substances or chemicals employees would be exposed to,” Badger told The Daily Signal in an interview Thursday. “I’ve heard this called a testing mandate with a vaccine opt out. But either way, the statute doesn’t allow OSHA to mandate either testing or a vaccine.”

However, that rule doesn’t require medical workers to get vaccinated, and an employee may opt out after signing a statement that he or she is aware the vaccine is being offered.

Moreover, in 2000, Congress passed the Needlestick Safety and Prevention Act to force OSHA to adopt stricter regulations to prevent the workplace transmission of bloodborne pathogens. Notably, Congress did not demand that anyone be vaccinated against Hepatitis B in addition to or in lieu of the newly imposed additional safety precautions.

“In any case, Congress explicitly authorized that vaccination policy,” Badger said, in contrast to what Biden is attempting to do.