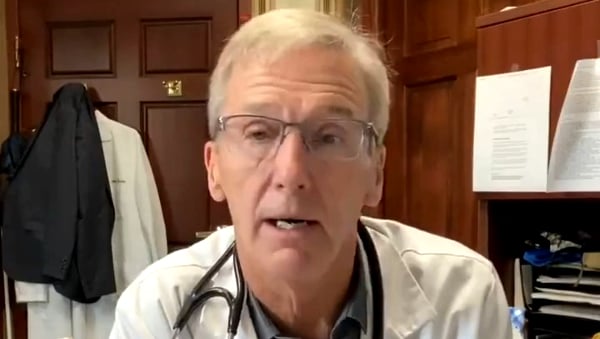 Dr. Scott Jensen, a physician and state senator in Minnesota who is running for governor, says his medical license has been investigated five times because of complaints against his positions on issues related to the COVID-19 pandemic.

Jensen said Tuesday in a video posted on Twitter that he got home Monday night to find out he was being probed once again.

He listed the half-dozen complaints triggering the latest investigation.

"I'm am problematic because I called for civil disobedience in regards to the press conference that President Biden issued Sept. 9 that he never followed up on," he said.

Jensen pointed out that Biden has not yet ordered OSHA to write a rule requiring private companies with 100 or more employees to vaccinate their workers.

"So what he have is a press conference," he said, and, somehow, "that's a problem for me."

The complaint also alleges he's not vaccinated. But Jensen said he's been very clear about the fact that he has chosen to not be vaccinated because he has "a plethora of antibodies" from having recovered from COVID.

"Last I checked," he said, "school boards are making those decisions. I have my opinion(s), and I'm entitled to those."

"Really?" he said. "What about (Biden medical advisers) Mike Osterholm and Tony Fauci, who say don't wear masks, don't wear masks and then all of a sudden they get religion and wear masks?"

Jensen said there's "19 years of data that says masks don't do the job."

It's also alleged, he said, that he's promoted the use of ivermectin to treat COVID."

"That's a decision between a patient and his doctor," he said, adding that the 200 members of Congress who have taken the drug might have something to say about it.

And he's accused of inappropriately promoting the benefits of natural immunity.

Jensen said he will respond to the complaints, but he warned citizens of people who want to "politically weaponize" medicine.