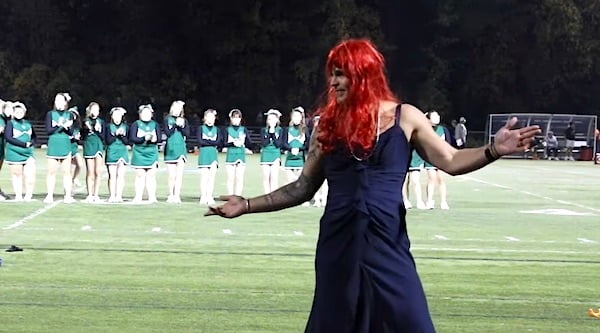 Boys were encouraged to dress as girls at Burlington High School in Vermont on Friday , Oct. 15, 2021. (Video screenshot)

About thirty participants, most of them male, strutted the track in a mixture of gowns, dresses, high-heeled boots, feather boas, colorful wigs and other accessories with techno music playing in the background. Students in the stands, decked out in rainbow attire, cheered them on.

Andrew LeValley, an English teacher and advisor to the GSA club, said the school’s principal and athletic director were “on board excitedly,” according to Seven Days. Tom Flanagan, the Burlington superintendent, joined in wearing a rainbow cape and holding a rainbow flag, Seven Days reported.

“I think it’s hard for boys to express an effeminate side of themselves, and often that might be the side they love the most,” LeValley told Seven Days.

Policies regarding gender identity and transgender students have embroiled school boards in controversy over the past year. The Loudoun County, Virginia, school board voted to allow students to use bathrooms based on their gender identity rather than their biological sex three months after a boy wearing a skirt allegedly raped a female student in a local school’s girls’ restroom. The school did not disclose the attack or the second sexual assault the same boy allegedly committed months later to parents until The Daily Wire broke the story.