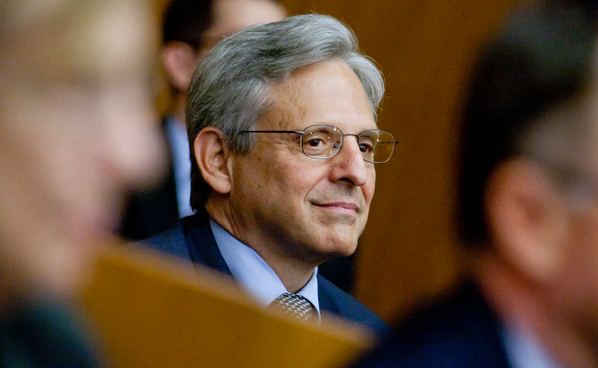 Joe Biden's attorney general, Merrick Garland, stonewalled on the issue of his orders that could benefit his son-in-law's company financially and denied characterizing public school parents as domestic terrorists during an appearance before the U.S. House Judiciary Committee on Thursday.

He also took a tongue-lashing from Rep. Jim Jordan over his political agenda.

Fox News reported Garland refused to answer questions whether he sought any "ethics guidance" regarding Panorama Education, started and run by his son-in-law, and which is in line to benefit financially from Garland's campaign against parents who oppose its left-leaning, pro-LGBT and pro-Critical Race Theory ideologies.

Garland was asked by Rep. Mike Johnson, R-La., about the conflicts of interest inherent when a government official takes action that benefits his family financially.

Fox News reported Panorama reportedly has been paid $27 million from more than a thousand school districts – triggering concerns about the family's financial fortunes and how they benefit from Garland's decision to crack down on opposition to leftist school board agendas.

Responding to a letter from a school boards group in America that described those opponents to leftist ideals as domestic terrorists, the Biden administration, through Garland, assigned the FBI to begin investigating and prosecuting those parents.

"We now know that that company publishes and sells critical race theory and so-called anti-racism materials to schools across the country, and it works with school districts nationwide to obtain and analyze data on students, often without parental consent," said Johnson.

But Garland said "nothing" in his memorandum has "any effect on the kinds of curriculums that are taught or the ability of parents to complain."

Fox explained, "Johnson pressed the attorney general on whether he sought ethics guidance concerning his son’s business before he sent out his controversial Oct. 4 memo, which directed the FBI and U.S. attorney offices to hold meetings with federal, state and local law enforcement leaders within 30 days to discuss ways to combat what the DOJ described as an 'increase in harassment, intimidation and threats of violence against school board members, teachers and workers in our nation’s public schools.'"

Johnson pointed out that the very basis of parental concerns about their local boards' actions is the "very curricula that your son-in-law is selling."

But Garland refused to answer questions about ethics advice or guidance. And he claimed again there was no conflict of interest in his orders that, at a minimum, provide protection for the agenda of his son-in-law's company.

Merrick also claimed the DOJ didn't label parents as domestic terrorists, even though his memo sent the DOJ after parents who dissent from local board agendas.

He alleged, "The Justice Department supports and defends the First Amendment right of parents to complain as vociferously as they wish about the education of their children, about the curriculum taught in the schools. That is not what the memorandum is about at all, nor does it use the words 'domestic terrorism' or 'PATRIOT Act,'" he said.

In fact, it was the request from the National School Boards Association to Biden to act against parents that called them terrorists and asked that the nation's anti-terror PATRIOT Act be invoked against them.

Garland's order was in response to that demand.

His order, in fact, cited "threats against public servants" as being illegal.

The problem with the description is that boards have been claiming that parents who simply protest their agenda, and vocally oppose it, citing the option voters have to recall board members and remove them, are the "threats."

Jordan also delivered a tongue-lashing during the hearing.

He responded, "Are you kidding me?" after Chairman Rep. Jerry Nadler claimed it was the DOJ under President Trump that was "political."

He pointed out the undeniable sequence of recent events, the NSBA demanding DOJ action against parents, and Garland's response within days.

"Republicans on this committee have sent the attorney general 13 letters in the last six months," he said. "Eight of the letters, we've got nothing - they just gave us the finger."

He pointed out how Garland had assembled a "snitch line" to be used against parents within five days "after a left-wing political organization asked for it."

"It that's not political I don't know what is," he said.

Rep. Burgess Owens, R-Utah, also asked if Garland supported the comparison between domestic terrorism and parents' school board protests, and Garland claimed the DOJ was only concerned about "violence and threats."

However, one of the incidents that triggered the back-and-forth in politics is when a Virginia school board concealed the fact that a boy wearing a skirt allegedly went into a girls restroom and assaulted a girl.

When the superintendent claimed during a meeting there was no record of such an attack, which reportedly was repeated by the same offender a short time later with another victim, the father of the girl protested, verbally and vocally, and school board members had him arrested and charged.

Fox News noted that just as the hearing was going on attorneys general from 17 states sent Biden and Garland a letter demanding the government stop trying to intimidate parents into silence.

"Your recent action seeks to chill lawful dissent by parents voiced during local school board meetings by characterizing them as unlawful and threatening," the attorneys general wrote in the letter.

It also was reported half of the eight members of the U.S. Commission on Civil Rights wrote to Garland, scolding him for his memo calling out the FBI against parents.

"Your memorandum did not cite any specific examples of ‘harassment, intimidation and threats of violence’ that would provide any basis for law enforcement action by the Department," the letter read. "We are concerned that much of what the NSBA calls threats and acts of intimidation—and compares to 'domestic terrorism and hate crimes'—can be merely classified as political speech."

In fact a poll on Thursday on the issue was released by the Convention of States Action in conjunction with the Trafalgar Group.

"The very idea that our attorney general would direct our nation’s federal law enforcement to investigate everyday moms and dads who are rightly concerned about their children’s education is shocking and hard to fathom. These are the tactics of totalitarians in places like China and North Korea, not here in America,” said Mark Meckler, president of Convention of States Action. “This explains the findings in this poll, where one can plainly see that those who are aware that Merrick Garland made this announcement oppose him by large majorities, while there’s a group who marked ‘not sure’ because they don’t know about his announcement or don’t know enough about it. The nearly 20 percent overall who support Garland’s actions against parents are consistent throughout all of our polls, in which we see that roughly this percentage of voters will support practically anything the Democrats support. A scary reality in these challenging times."

The results show only 19.8% of respondents supported Garland's stance on the dispute.