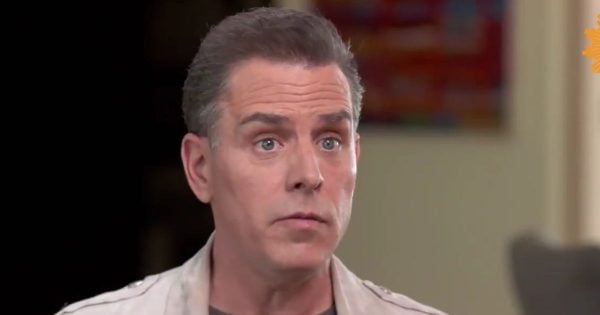 Just one day after reports revealed Joe Biden's son, Hunter Biden, mingling with potential art buyers he's not supposed to know because of worries over those wanting to buy influence at the White House, a report revealed he sold five of his paintings for $75,000 each.

The Daily Mail reports at least five pieces of Hunter Biden's art sold at his recent show at the Georges Berges Gallery in Los Angeles.

The identities of the buyers "remained anonymous," the report explained.

"A source familiar with the sale told the New York Post that most of those allowed to buy works are long-term, private collectors with the gallery, people that Berges knows personally," the report explained.

The Daily Mail earlier had obtained video and photos revealing Biden entertaining upward of 200 people at a Hollywood studio.

The White House, when confronted with questions about how Hunter Biden could sell his novice art for tens, or even hundreds, of thousands of dollars and still avoid the appearance of influence-buying inside the White House, claimed anonymity would take care of the problem.

He said the solution is to have Hunter Biden delay art sales until Joe Biden no longer is in office.

"Meanwhile, sources say lawyers are vetting individuals who want to view Biden's paintings at Berges' Manhattan gallery," Daily Mail said. That event now has been delayed from its announced date this month to springtime.

Asked about the issue, White House Press Secretary Jen Psaki said, "Again, the gallerist has spoken to — we've spoken to the specifics of what the gallerist has agreed to and what recommendations were made. I've done that several times. I don't have additional details for it from here. I'd point you to them.'"

When Hunter Biden, the scandal-plagued son of Joe Biden, first came up with the idea of selling his amateur art for half a million dollars, there immediately were concerns the conduit simply would be a way for outsiders who want favors from the Biden administration to funnel cash into the family's coffers.

No worries, said the White House. They'll be sold through a process that would not allow Hunter Biden to know who was buying his work.

But the Daily Mail has reported that Hunter Biden was seen "hanging out with star-studded potential buyers of his half-million-dollar art at LA's Milk Studios debut show, despite White House claims he will have no idea who is buying his pieces."

The publication confirmed Hunter Biden was at "his first art exhibition for potential buyers and celebrity guests including World Champion boxer Sugar Ray Leonard, Moby, Los Angeles Mayor Eric Garcetti …. despite White House claims the president's son will have no idea who is buying his pieces."

The Mail said it obtained video and photographs showing Hunter Biden and his art dealer Georges Berges with some 200 people at the Milk studios in Hollywood just days ago.

The report explained the foundation for the concerns: "The eye-watering sums, unheard of for a debuting artist, have prompted serious concerns by former White House ethics chiefs, who fear that money for the works could be used as proxy political donations or to curry favor with President Joe Biden and his family."

It was Sebastian Smee, the Washington Post's Pulitzer Prize–winning art critic, who said the work was like that of a "café painter," with, "You see a certain kind of art in coffee shops, and some of it is OK and a lot of it is bad, and sometimes it's surprisingly good. But you wouldn't, unless you were related to the artist, spend more than $1,000 on it."

Peter Schweizer, chief of the Governmental Accountability Institute and author of the best-selling books "Profiles in Corruption," "Secret Empires" and "Clinton Cash," recently wrote in a column that he wanted to know why Congress is not investigating the "scam" by Hunter Biden to channel money into his family's coffers.

Schweizer raised the questions in a column at the Gatestone Institute, where he is a distinguished senior fellow.

"Why is this not being scrutinized?" Schweizer wrote. "The ranking member of the House Oversight Committee, Rep. James Comer, R-Ky., has sent letters to Bergès demanding the complete documentation of transactions involving Hunter's art sales. Comer is unlikely to get it: only the Democrat majority on the committee can authorize subpoenas to compel those records. As the Wall Street Journal noted in a recent editorial, the committee's chairwoman, Rep. Carolyn Maloney, D-N,Y., seems uninterested in doing so.

"Why are they failing to scrutinize what is so obviously a back-door scheme to funnel money to the president's son from foreign sources? Every American who cares about transparency in government should be outraged."

The author cited other "scams" involving Hunter Biden and lots of money.

"First, it was his being named, with no expertise whatsoever in either Ukraine or the oil and gas business, to the board of directors of Burisma, a Ukrainian oil and gas company under investigation for fraud. Then it was the deluxe payday in 2012 for his Rosemont-Seneca real estate investment partnership, which was bankrolled to the tune of more than $1.5 billion by Chinese investors with close ties to the Chinese Communist Party. Hunter had little or no experience in private equity, either, but he had just arrived in Beijing aboard Air Force Two with his father the Vice President, just two weeks before that enormous deal was announced."

Joe Biden also has shown a willingness to intervene in his son's activities.

He met, as vice president for Barack Obama, with Ukrainian officials at a time that Burisma was under investigation for corruption, and he returned home to brag about how he threatened the nation with withholding $1 billion in American aid if they didn't get rid of the prosecutor.