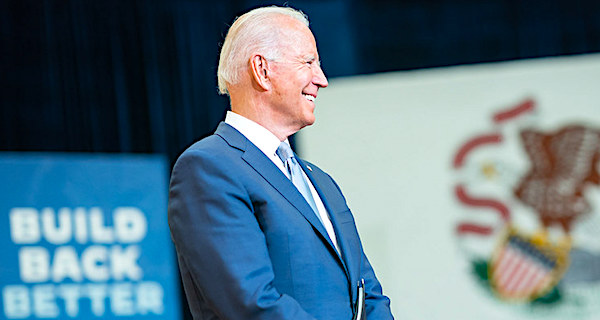 The White House is once again at odds with the senior senator from West Virginia.

Joe Manchin has made clear for months that the administration’s sprawling $3.5 trillion social spending package is too large, and just as progressives seemed to agree that the top-line number could be whittled down somewhat, the moderate Democrat drew another line in the sand, this one underscoring the Hyde Amendment.

The amendment represents a decades-long agreement by both parties that prohibits federal dollars from funding abortion, except in cases of rape, incest, or when the life of the mother is in danger. Manchin wants it included in the spending bill. The White House does not. Thus has emerged another obstacle to passing the president’s legislative agenda.

When asked Monday about federal funding for abortion, White House press secretary Jen Psaki told reporters that “the president opposes the Hyde Amendment. That has not changed.”

Manchin was just as adamant last week in an interview with National Review. As hopes for the bipartisan physical infrastructure bill’s passage crumbled, he insisted on the steps of the Capitol that “we are not taking the Hyde amendment off. Hyde is going to be” part of the larger “human infrastructure” measure. Knowing that his party can't afford to lose a single vote, Manchin was insistent that Hyde be included in the reconciliation package, saying, “That’s dead on arrival if that’s gone.”

The senator took that hard line on Wednesday. By Sunday, progressives were countering on the weekend shows with their own ultimatums. Congressional Progressive Caucus Chair Pramila Jayapal, asked by CNN’s Dana Bash if she would support a bill that included the abortion-funding prohibition, replied that she would not. “Let's just wait. This is a negotiation and we've got to continue to move this forward, but the Hyde Amendment is something that the majority of the country does not support," added Jayapal, whose caucus had flexed its muscles to stifle a vote last week on the bipartisan package when there wasn’t an agreement on the costlier bill.

Democrats recognize the danger posed by the divide. This includes the second-ranking Democrat in the Senate, Dick Durbin of Illinois, who told CNN before Jayapal came on air that he has supported legislation with and without the amendment previously. He will support including it again in the spending package, Durbin indicated, because “I don't want to let the package break down over that issue.”

Republicans are more than happy to let Democrats to fight among themselves over the issue. Conservatives uniformly oppose the reconciliation package and seem content to fan any flames in hopes of keeping the fire going. Heritage Action, for instance, stirred the pot by noting that Biden has, in fact and recently, changed his position.

“Biden is a flip-flopping politician who supported Hyde for decades before pandering to progressives in 2019 by coming out in support of taxpayer funding for abortion,” the group said in a tweet that linked to an article detailing how Biden went from backing the amendment to opposing it ahead of the 2020 presidential primary.

Manchin, meanwhile, has enjoyed the support of the pro-life lobby throughout negotiations. The Susan B. Anthony List has launched a months-long, six-figure ad campaign on West Virginia airwaves encouraging voters there to “thank Manchin for not forcing us to pay for abortions.” Marjorie Dannenfelser, president of that anti-abortion group, told RealClearPolitics that “there has long been consensus among the American people — regardless of party — that taxpayers should never be forced to pay for abortions. We thank Senator Manchin for standing up for this consensus and for the pro-life values of his West Virginia constituents.”

This is not the first time Manchin has bucked his party on the issue. During the 2019 State of the Union address, he was the only Democrat to join Republicans in a standing ovation for then-President Trump when he called for a 20-week abortion ban, a moment that earned him an icy rebuke from New York Rep. Alexandria Ocasio-Cortez, who was seated in the row behind him.

Photographers captured that moment, and while Trump’s proposed ban never materialized, Manchin’s position has not changed. Unless the senator or Democrats give in, the disagreement over federal funding of abortion could end up tanking a centerpiece of Biden’s domestic agenda.