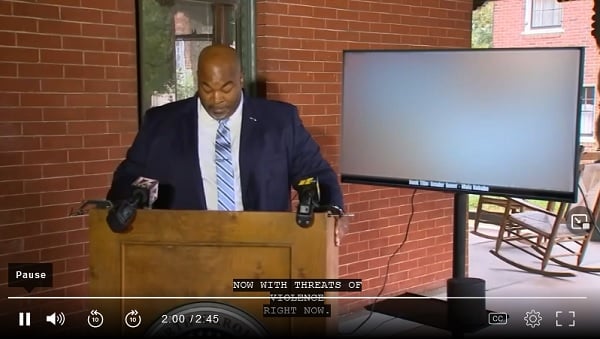 Media outlets are attacking Lt. Gov. Mark Robinson of North Carolina for calling explicit images and lessons promoting transgenderism and LGBT activities in public schools in his state as "filth."

But then they are blurring those images – apparently for not being appropriate for their audiences.

The video with the media blurring the images is found here.

And Robinson has explained that he was describing the images and lessons as filth, not any person or group of people, as activists have been claiming this week.

According to Just the News, it was back a few months when Robinson was speaking at Asbury Baptist Church in Seagrove, N.C., that he put the "filth" label on the lessons and images that sometimes are being used.

An organization that monitors conservatives then posted it online.

North Carolina Lt. Gov. Mark Robinson says Christians must take control of public schools because children are being abused by being taught "filth": "There's no reason anybody anywhere in America should be telling any child about transgenderism, homosexuality, any of that filth." pic.twitter.com/aXjCPFKTs0

In an interview on the John Solomon Reports podcast, Robinson explained, "My intent was to describe the material that is being presented to children in schools, and we have made that quite plain. Not only have we made it plain with our words, we've made it plain with written and visual examples. And so this whole argument that somehow that I was calling the LGBT community 'filth' is just nonsense, not true."

While media outlets have launched a barrage of criticism against Robinson, one, WTVD, an ABC affiliate, while calling Robinson's comments "homophobic," blurred the images about which he was concerned.

Under attack from state and federal officials both, Robinson held a press conference to reveal images from "Gender Queer," which is a book that has sexually graphic images.

"These materials do not belong in the classroom, the hallways or the libraries," he said.

Then in WTVD's report, the station "blurred out the entire screen from which Robinson showed the pictures," Just the News reported.

Robinson said he has no plans to resign, as Democrats and LGBT activists have demanded.

"We are not going to stop until the schools of North Carolina are safe from this kind of filth," he said.