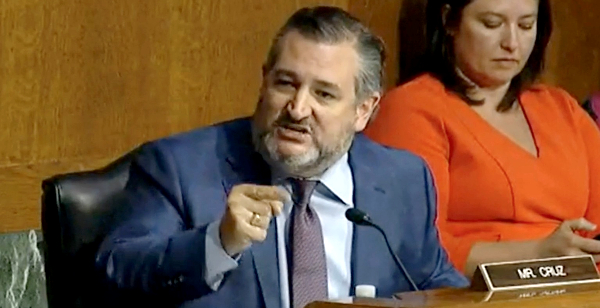 Like the ACLU famously did in its legal defense of neo-Nazis who wanted to march in a Jewish-majority Chicago suburb 40 years ago, Sen. Ted Cruz, R-Texas, on Wednesday in a hearing defended the First Amendment right of a man to invoke a Nazi salute to express his view that school board members were acting like fascists.

In fact, in the Senate oversight hearing, Attorney General Merrick Garland agreed with Cruz that the man's action was constitutionally protected.

Nevertheless, the Daily Beast was among many left-wing outlets that framed the exchange as "Ted Cruz Defends Parents Doing Nazi Salutes at School Board Meetings."

Democratic Reps. Eric Swalwell of California and Ilhan Omar of Minnesota joined in the smear.

Omar wrote above a link to a clip of the exchange in the Senate hearing posted by Aaron Rupar, who authors a Substack newsletter: "Ted Cruz just casually defending Nazis in a congressional hearing"

"You are frequently a liar (when you’re not sleeping with Chinese spies)," Cruz told Swalwell. "But here, your lie is exactly 180 degrees false. I was defending the right of citizens to denounce authoritarian policies. In other words, to OPPOSE Nazis (or petty tyrants), not to support them."

The senator tweeted a similar response to Omar that began with, "You are frequently a liar (and often spewing anti-Semitism)."

Lefty journos are either (1) dishonest or (2) not very bright (or both).

The parent was doing the Nazi salute because he was calling the authoritarian school board Nazis—evil, bad & abusive.

And yes, calling someone a Nazi is very much protected by the First Amendment.

Journalist Glenn Greenwald pointed out on Twitter that progressive activist Lawrence Lessig, who noted he is "no fan of Cruz," called out the Daily Beast for its "disinformation."

Greenwald said the Daily Beast's slant was "pure, 100% fabrication, complete fake news, disinformation, whatever you want to call it."

During a fiery Senate Judiciary Committee hearing, Sen. Ted Cruz at one point defended parents throwing up Nazi salutes at school board meetings: “My God! A parent did a Nazi salute at a school board because they thought the policies were oppressive." https://t.co/mEzNMvcP17

But Greenwald said he did not expect the Twitter and Facebook "misinformation" police to do anything with the false headlines, because doing so would not serve their "ideology."

He said "liberal digital outlets" live "in a closed ecosystem of information, speaking only to and for each other."

"So the most prolific media liar [Aaron Rupar] claims 'Ted Cruz defends Nazi salutes' and they all repeat it," Greenwald wrote.

"It takes about 6 working brain cells to watch this clip and see everything [Rupar] claimed is a lie."

The ACLU recounted its defense of neo-Nazis in Skokie, Illinois:

In 1978, the ACLU took a controversial stand for free speech by defending a neo-Nazi group that wanted to march through the Chicago suburb of Skokie , where many Holocaust survivors lived. The notoriety of the case caused some ACLU members to resign, but to many others the case has come to represent the ACLU's unwavering commitment to principle. In fact, many of the laws the ACLU cited to defend the group's right to free speech and assembly were the same laws it had invoked during the Civil Rights era, when Southern cities tried to shut down civil rights marches with similar claims about the violence and disruption the protests would cause. Although the ACLU prevailed in its free speech arguments, the neo-Nazi group never marched through Skokie, instead agreeing to stage a rally at Federal Plaza in downtown Chicago.