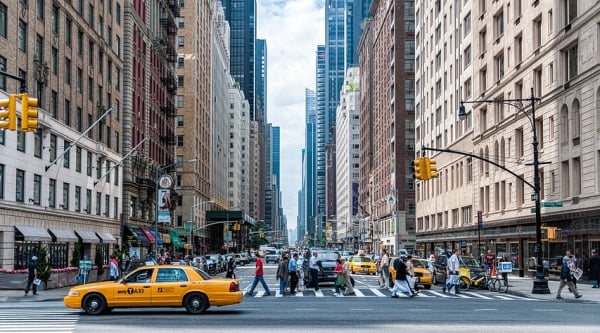 A New York judge has rejected a union request to suspended the city's announced COVID-19 vaccination mandate for police officers, meaning within just days there could be crimes to which officers simply cannot respond.

CBS reported the judge rejected the request from the Police Benevolent Association, representing some 24,000 police officers, to hold off on the requirement.

The union had wanted the temporary restraining order because the city has not made clear potential exceptions for medical or religious exemptions, and is refusing to give unvaccinated officers time to apply.

The vaccination rate among officers is about 73% so far, and the union has stated its position that getting the shots of the experimental COVID treatments is a personal medical decision.

"Today's ruling sets the city up for a real crisis. The haphazard rollout of this mandate has created chaos in the NYPD," PBA President Patrick J. Lynch said in a statement to CBS. "City hall has given no reason that a vaccine mandate with a weekly testing option is no longer enough to protect police officers and the public, especially while the number of COVID-19 cases continues to fall."

It was the first such legal action launched against Mayor Bill de Blasio's plans to control city employee medical decisions, and an immediate appeal was being submitted.

The city's demand had been that police officers, firefighters and others get at least their first does by Friday – or be left without pay.

The New York Daily News estimated that the deadline could leave a quarter of the city's police officers at home without pay.

Will New York City be facing streets without cops because of the vaccine mandates?
99% (572 Votes)
1% (3 Votes)

The publication noted widespread opposition to the mayor's controlling dictate led to a huge protest in lower Manhattan earlier this week.

De Blasio said he believes in vaccine mandates – and suggests every mayor or governor should require workers to get the shots.

Despite whatever protection the shots provide, they also have been blamed for thousands of fatal side effects.

The New York Post noted that the issue was threatening not only police units, and that the New York Fire Department was preparing to shut down as many as 20% of its fire companies, "and take an equal portion of its ambulances off the streets."

"The Department must manage the unfortunate fact that a portion of our workforce has refused to comply with a vaccine mandate for all city employees," Commissioner Daniel Nigro charged.

"We will use all means at our disposal, including mandatory overtime, mutual aid from other EMS providers and significant changes to the schedules of our members. We will ensure the continuity of operations and safety of all those we have sworn oaths to serve."

Reuters noted the chief of the firefighters' union told his members to report for duty regardless of de Blasio's order to get the COVID-19 shots.

Andrew Ansbro, of the Uniformed Firefighters Association, said his members were "insulted" by de Blasio.

De Blasio's mandate affects some 50,000 workers in New York, who have a deadline late Friday to prove they are vaccinated.

AP said the judge was Lizette Colon, and her ruling said the mandate can take effect as scheduled. But she also ordered city officials to be in court Nov. 12 to defend their demands.

Estimates are that about three quarters of the affected police department employees have taken the shots, while the figure is about 68% for fire department workers.

EDITOR’S NOTE: Last year, America’s doctors, nurses and paramedics were celebrated as frontline heroes battling a fearsome new pandemic. Today, under Joe Biden, tens of thousands of these same heroes are denounced as rebels, conspiracy theorists, extremists and potential terrorists. Along with massive numbers of police, firemen, Border Patrol agents, Navy SEALs, pilots, air-traffic controllers, and countless other truly essential Americans, they’re all considered so dangerous as to merit termination, their professional and personal lives turned upside down due to their decision not to be injected with the experimental COVID vaccines. Biden’s tyrannical mandate threatens to cripple American society – from law enforcement to airlines to commercial supply chains to hospitals. It’s already happening. But the good news is that huge numbers of “yesterday’s heroes” are now fighting back – bravely and boldly. The whole epic showdown is laid out as never before in the sensational October issue of WND’s monthly Whistleblower magazine, titled “THE GREAT AMERICAN REBELLION: ‘We will not comply!’ COVID-19 power grab ignites bold new era of national defiance.”